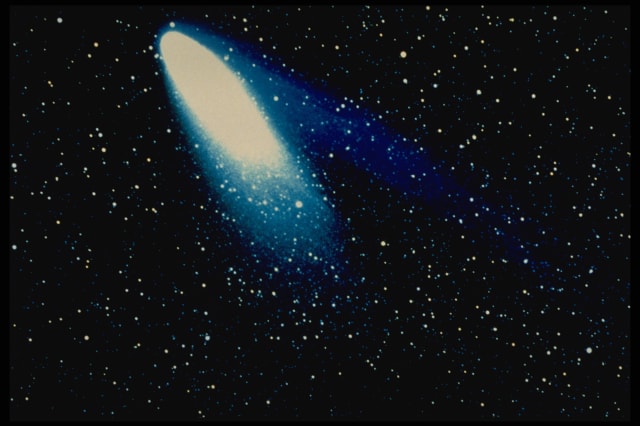 Shooting stars are lighting up the skies this month as the Earth moves through the trail of Halley's comet.

The Orionid is one of two meteor showers created by the debris left by Comet Halley.

The Eta Aquarids in May this year was the first meteor shower created by debris left by the comet.

For the best views of the beautiful display look up to the sky on Thursday, October 20 where 20 meteors are expected to be visible every hour - the clearer the skies the better you will be able to see it.

The Met Office said: "The Orionids are a remnant of Comet Halley and at its peak you could see up to 20 shooting stars per hour."

Orionid meteors are known to be very fast travelling at around 41 miles per second, and typically on the faint side, although with clear, dark skies you still have a good chance of spotting one with its persistent, long trail.

The Orionid meteor shower is named as such because it appears to radiate from the constellation Orion, which is one of the most visible and recognisable in the sky throughout the world.

Halley is regarded as one of the most well-known comets in space and it is named after English astronomer Edward Halley - the man who discovered it.

Most comets are not bright enough to be visible to the naked-eye, making the bright ones a rare and beautiful sight.

You can only see Halley's Comet on earth every 75 years, it is its debris that causes the spectacular meteor showers, which make it so well known.

The next time the actual comet will be visible from Earth is in the year 2061.

Commander Chris Hadfield's stunning views from space
"Tonight's Finale: The Richat Structure. A giant gazing eye upon the Earth."
"To commemorate the passing of the Iron Lady, in the centre of these London lights is #10 Downing Street."
"The Australian Outback is effortlessly crazily beautiful."
"The effortless natural art of the southern Sahara."
​"The beautiful and violent ugliness inside a naked volcano. Chad, Africa."
"Beijing just after sunset. I'm still trying to spot the Great Wall, but it's hard as it's narrow and dun-colored."
"A heraldic Spring dragon of ice roars rampant off the coast of Newfoundland."
"Canada rocks."
"Dr. Seuss-inspired swirls in the Black Sea."
"Little farmers, big farmers and nature, in Turkey."
"Big storm swirling off the Irish coast on 9th May."
"A sunny day in Scotland"
"To some this may look like a sunset. But it's a new dawn."
"Hope you Bruins play a memorable game tonight vs the Leafs."
Up Next