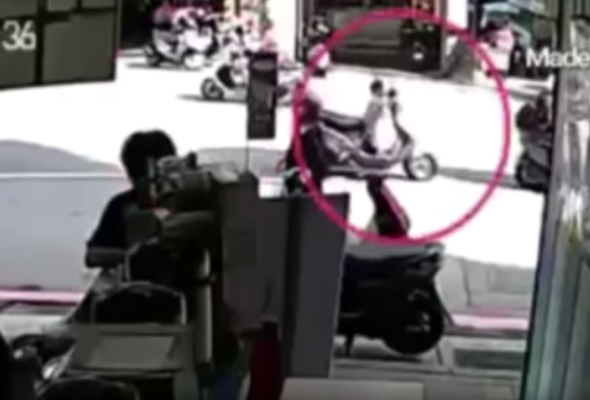 A child was lucky to escape unhurt after accidentally riding off on his dad's scooter.

The unidentified man had been travelling through New Taipei City in Taiwan on the scooter with his son.

During the trip, the dad pulled over to buy something in a shop and left his son on the scooter with the engine turned on.

It was reported that the unsupervised toddler was trying to mimic his dad by grabbing on to the handlebars and revving the engine. Unfortunately, the child managed to engage the clutch, which sent the scooter shooting down the road.

CCTV footage from a nearby shop shows the scooter racing by with the youngster holding on for dear life. Moments later, his father can be seen sprinting down the road behind him.

Taipei authorities said the boy crashed the scooter shortly after and was fortunately unhurt.