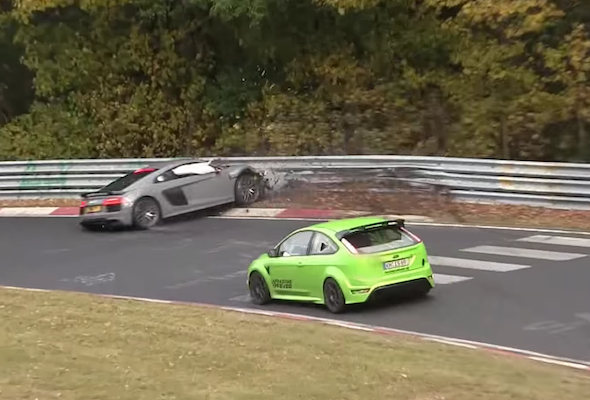 A new Audi R8 V10 Plus has crashed heavily at the Nurburgring race track in Germany.

Video from the scene shows the Audi's driver entering the notorious Adenauer Forst corner much too quickly, causing his rear wheel to touch the grass.

This sends the car into a spin, resulting in a head-on collision with the barrier. All of the airbags deploy and as the car comes to a stop it's clear the front has been completely destroyed.

A Ford Focus RS, which was following closely when the crash happened, manages to pick its way through the carnage without suffering any damage.

The driver and passenger quickly jump out of the wrecked supercar and make their way to the safety of the spectator areas. Both appear unhurt by the crash.

The corner is famous for catching out drivers as a tight left turn follows a series of fast bends. Drivers need to slow down for the previous corner in order not to overshoot the left turn, but inexperienced drivers often forget.