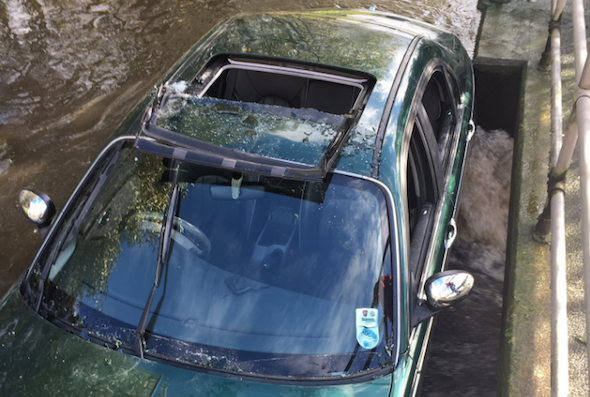 Two cyclists came to the rescue of three elderly people after their car became stuck in a flood.

The incident occurred on Furnace Grange Road near Wolverhampton yesterday morning.
The cyclists came across the stranded Rover 75, which had stopped while crossing the Trescott Ford. When they approached they realised there were three people inside.

Assessing the situation, they realised that the car had been pushed against the side of the bridge. This was stopping the flow of water escaping the road, meaning that floodwater was building inside and outside the car.

After phoning the emergency services, the cyclists were joined by four passers-by. One of the rescuers climbed in through an open window and helped a man out of the back seat.

While this was happening, the others used a pole to break open the sunroof, allowing the women in the front to escape.

Steve Trice, one of the cyclists involved, told the Express and Star: "Because the car stopped water flowing across the ford, it was rising around the car and was coming inside, up to their knees.

"It was a very calm situation solved thanks to team work between a few people."

He said: "We would like to commend the bravery of the cyclists for putting themselves in danger to help others."

As fire crews arrived, the last person was being pulled from the vehicle. Ambulance crews were called, and after checking over the three occupants they gave them the all clear.