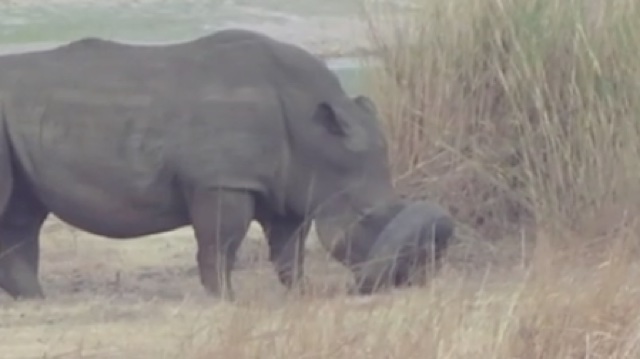 Vets were called to rescue a wild white rhino after its snout became stuck in a discarded tyre.

Mark the rhino had managed to get the tyre stuck over his horn stub while he was feeding.

If vets hadn't been called to the scene, he would have starved.

We first saw Mark's story at Sky News, but vets from the Aware Trust charity wrote an update about the incident on their Facebook page.


It read: "White rhino Mark found himself in a real pickle today when he got this car tyre stuck round his snout. At first rangers thought he'd be able to dislodge it himself but as he continued to thrash around in frustration it became apparent the tyre was firmly stuck behind his front horn stub.

"The muscles that open your mouth are much weaker than the muscles which close your mouth, since they usually have the help of gravity, so no amount of straining was going to enlarge the tyre's central hole. Mark's mouth was bound firmly shut and he couldn't eat or drink. Rangers then alerted AWARE Trust vets Keith and Lisa.

"When we took the phone call, we wasted no time in packing up our kit and racing out to the Park - 1.5 hours away. We found Mark, the dominant bull, lying close to his girlfriends, looking decidedly dejected and exhausted from his ordeal on this scorching hot day.

"With the drought at its zenith, the lake has receded a lot and pollutants such as nets and tyres are washing up all the time. Mark obviously fancied some vegetation that was growing right in the centre of the tyre, and once he stuck his nose to the ground to grasp it, the tyre came up over his horn stub."

The statement added: "We can only do this work with assistance from the public. Without funds, we cannot react. Please help our wildlife rescues by donating here."

Pictures of baby rhinos
Ailsa, a six week old baby White Rhino, at Drummond Safari park near Stirling, Scotland. Mother "Dot" one of Blair Drummond Safari Parks White Rhinos gave birth to her second calf as part of the European Breeding Programme. Staff were alerted to the birth by an individual who had phoned in from Cyprus after following Dot's pregnancy on the Rhino Web Cam on the safari web site.
This orphan is being fed by a carer at Imire Game Farm, Zimbabwe, after its mother was killed by poachers.
Komala, the 8 week old baby Greater One Horned Rhino, the first to be born at Chester Zoo in 80 years, takes her first steps outside.
Up Next