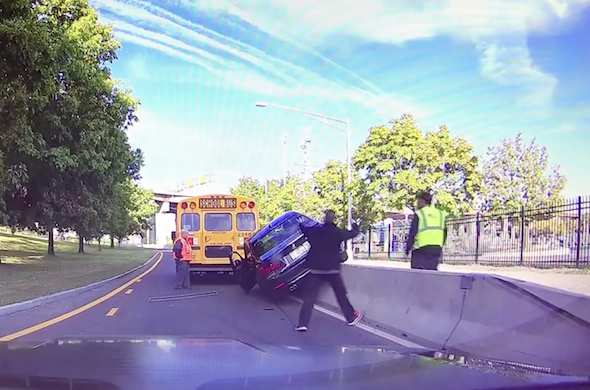 A BMW driver has been caught on camera crashing his car after getting angry at another motorist.

The incident took place in Albany in New York state earlier this week. While in slow-moving traffic, the driver with the dashcam reduces his speed to allow a school bus into his lane.

As the bus pulls out, the BMW driving behind is clearly angered by the fact the gracious move is slowing him down. He beeps his horn a couple of times before traffic gets going again.

As they approach the junction, the BMW driver realises he's about to get caught behind a red light and speeds to the right of the car with the dashcam.

With only one lane available to turn left, he suddenly runs out of room and crashes into a concrete barrier, becoming wedged on top of it. The BMW driver then climbs out of his wrecked vehicle and tries to justify his mistake...