Bikers try to sneak into Area 51 on secret track 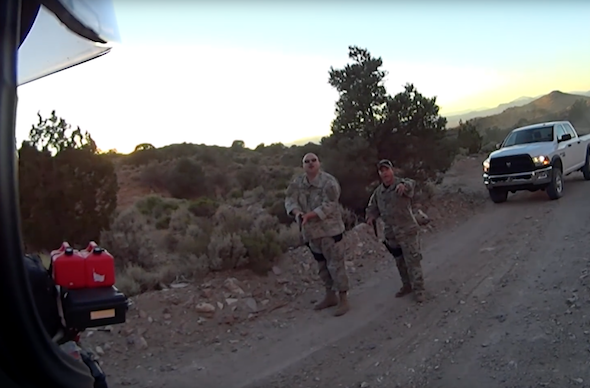 A pair of bikers who attempted to explore the secretive Area 51 were caught in a terrifying stand off with armed officers.

In footage caught on one of the rider's helmet cam, the pair venture through an unknown 'back gate' into the base in the Nevada desert.
Stopping on a dirt track, they are approached by a white pick-up truck, in which sit armed military men.

Exiting the vehicle, the camouflage-clad men instruct the bikers to put their 'f***ing hands up' before patting them down.

Eventually they are let go, with one of the guards commenting: "Listen, we are going to give you guys a chance. "Get on your bikes and get the f*** outta here.

"We'll call Lincoln County and write you each a $750 ticket."

Apologising for the hassle, the pair climb back on their bikes and nervously turn around. As they ride away, they cheer at having escaped the intense situation.

"That was the most gnarly thing I've ever been in," the filming rider shouts.