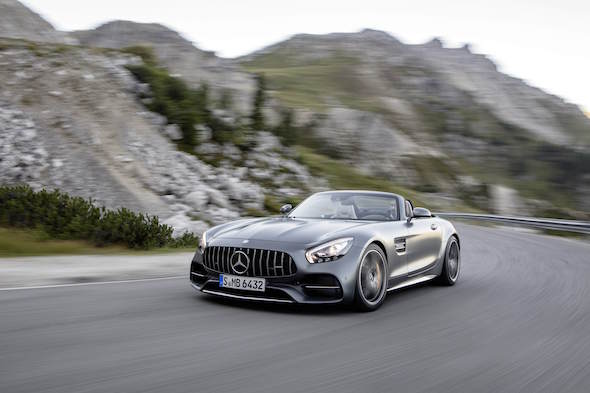 Just two weeks after it confirmed that the models were to be produced, Mercedes-AMG has released full specs of the all-new GT and GT C Roadsters.

During its media evening at the Paris Motor Show, the German carmaker unveiled the stylish convertible models along with a host of technical information. However, no mention of pricing was made.
The two variants, while sharing the same AMG DNA, are distinctly different. The entry-level AMG GT Roadster will produce 476hp and 630Nm of peak torque, and will be able to accelerate from 0-62mph in four seconds before topping out at 188mph. Its 4.0-litre V8 powertrain with twin turbochargers and direct injection will do 30.1mpg, with combined CO2 emissions of 219g/km.

Meanwhile, the far more potent AMG GT C will boast the same powertrain, but will produce 557hp and 680Nm at peak torque. Reaching 62mph from a standstill in just 3.7 seconds, and with a top speed of 196mph, as would be expected it is not quite as economical as its standard sibling. A combined fuel consumption of 24.8mpg is seen, while it produces 259g/km of CO2.

Both models feature styling cues from the AMG GT R sports car, such as the wide rear wings. These create space for a wider track and wider wheels at the rear axle, which allow for high cornering speeds and excellent traction.

Mercedes-AMG GT C Roadster
Up Next

Tobias Moers, Chairman of Mercedes-AMG, said: "With our two Roadster models, we are strategically expanding the AMG GT family by two exciting variants.

"With the AMG GT C Roadster, we are also introducing a new model variant to which we have transferred main performance-related components from our top sports car, the AMG GT R. The result: a highly dynamic driving experience in a very exclusive ambience, coupled with that pure roadster feeling."
Tags
Read Full Story