Dolphin leaps from water and dives on surfer in Australia 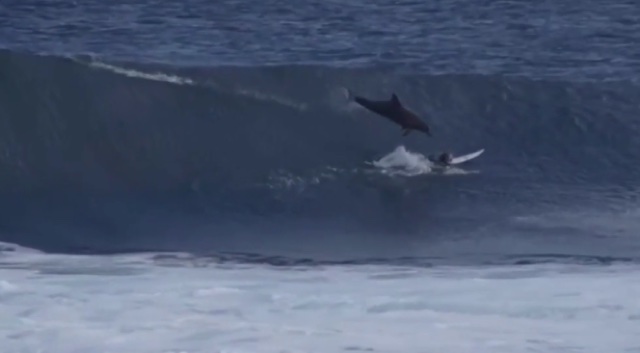 The moment a dolphin leaped out of the water and onto a young surfer has been caught on camera in Australia.

Jed Gradisen, 13, was riding the waves near Kalbarri in Western Australia when the dolphin launched out of the water and landed right on top of him.

The footage was caught by Jed's father and has been uploaded to YouTube.


Speaking to WA Today, Jed said: "I saw them coming. I was like 'Oh my god, they're coming straight for me.' So I like tried to get out of the way and he just jumped straight into me.

"The dolphin landed on my, sort of, shoulder and the back half of my body. The dolphin reacted, really I think, really shocked, almost as shocked as I was."

"It's nose went straight through my board, it must have hurt a bit. It was rustling around and really didn't know what to do."

The Metro reports that while Jed walked away unhurt, his board wasn't so lucky.