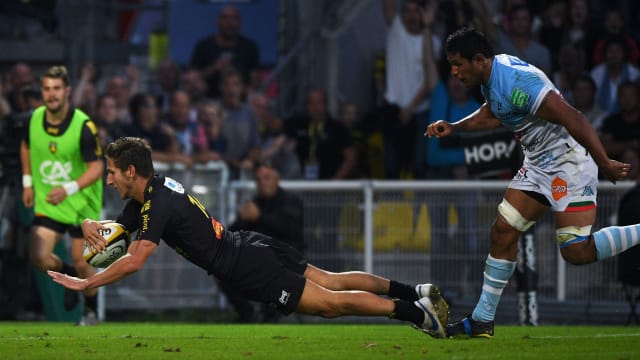 La Rochelle replaced Clermont-Auvergne as leaders of the Top 14 following their 34-17 victory over struggling Bayonne.

A Hikairo Forbes five-pointer and a penalty-try took the home side out to a 20-6 lead at half-time at the Stade Marcel Deflandre, with Vincent Rattez and Pierre Aguillon then crossing in the second half as Patrice Collazo's men secured their fourth win in six games.

Castres are up to third after they also enjoyed a home win, downing Racing 92 31-23.

Six successful kicks and a second-half try from Argentinean utility-back Benjamin Urdapilleta did most of the damage for the hosts, with forwards Eddy Ben Arous and Rodrigo Capo Ortega also finding the line.

Adam Ashley-Cooper starred for Bordeaux-Begles as they accounted for Lyon, the Australia international helping himself to a hat-trick of tries in a convincing 32-10 win at the Stade Andre-Moga.

The clash between Toulouse and Stade Francais was a far tighter affair, with Ugo Mola's men eventually prevailing 23-18.

All the tries came after the break with Alexis Palisson and Thierry Dusautoir touching down for Toulouse and Pascal Pape and Julien Arias replying in kind for the Parisians.

But the goal-kicking performance of the day took place at the Stade des Alpes where Jonathan Wisniewski and Tom Taylor landed 14 penalties and five conversions between them as Grenoble were edged out 39-38 by Pau.

Clermont-Auvergne, meanwhile, will reclaim top spot if they win at Toulon on Sunday, with the day's other game seeing fourth-placed Montpellier hosting sixth-placed Brive.