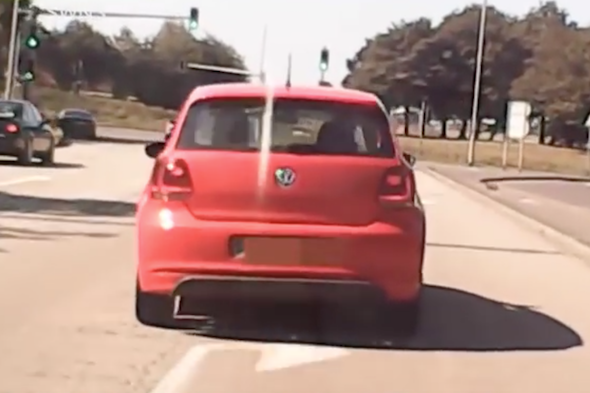 A motorist who was subject to a barrage of abuse from a young driver has claimed police accused her of tailgating.

Despite providing footage recorded on her dashcam, Stacey Dunkley was told by a police officer that a court could find her guilty of tailgating following the incident at the end of last month.
In the footage, which has since been shared online, a red Volkswagen Polo can be seen swerving in front of Dunkley's Mitsubishi Lancer as she drove through Northampton, forcing her to slam on the brakes.

When she sounds her horn, the youngster sticks his hand from the red car's window and puts his middle finder up, before brake-checking the 29-year-old a number of times.

At the next roundabout he sticks his head out the window and shouts indiscernibly, before again cutting in front of her at a set of traffic lights and braking sharply, while swerving dangerously across two lanes.

Despite the damning evidence, Dunkley claims police told her that she was to blame for driving too closely behind the vehicle.

Speaking to the Daily Mail, the mother of two – whose children were in the car during the incident – said: "He said to me the footage wouldn't be enough to get a conviction in court and that the driver could argue that I was tailgating him.

"I couldn't believe what I was hearing. I had reported a crime and gave the police the footage to prove it and they acted as if I was the criminal.

"How on earth can anyone suggest I was in the wrong, the driver is seen clearly targeting me and trying to force me to crash."