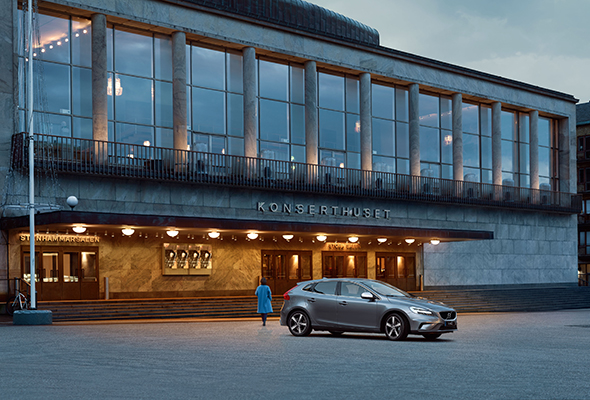 Volvo has always been known for being incredibly safe and offering a more characterful alternative to German rivals. Its new company image ups the safety ante while pushing to be a bit more premium.

The family hatchback market is a huge one, so refreshing the V40 to bring it in line with the company's new look is a pretty big deal for Volvo. AOL Cars spent some time with the 2017 model year facelift to see if it can challenge popular rivals, such as the Volkswagen Golf.
What is it?

The Swedish manufacturer's best-selling model hasn't been around for all that long. Introduced in 2012, it took over from the C30 coupe, S40 saloon and V50 Sportswagon as the brand's smallest model. It's easy to see why it's been a hit – Volvo's move upmarket has seen it set its sights firmly on the ubiquitous Volkswagen Golf, offering a slightly more characterful but just as capable alternative.

There's a wide range of eco-friendly diesel and petrol engines, as well as a performance-orientated 2.0-litre petrol unit that makes an impressive 242bhp.

The pick of the range are the four-cylinder turbocharged diesels. Our car was fitted with the revised D2 engine, which now emits just 89g/km of CO2. Despite having only 118bhp, it never feels like it's struggling to pull the car along and can achieve 84.1mpg on the combined cycle.

It's ideal for those who are just looking for low running costs, but for those who need a little extra punch we'd recommend the 148bhp D3 engine as it offers the best compromise of performance and economy.

First Drive: Volvo V40
Up Next

Impressive – Volvo has really nailed this premium hatchback thing. Despite being around since 2012, the interior design still has enough character to challenge more modern rivals, and the materials used stave off any feeling that it's ageing.

It's wonderfully Swedish inside – there's an effortlessly minimalist, modern feel, despite the rather excessive number of buttons. That 'floating' centre console continues to intrigue, even after all these years.

The exterior's styling has been modernised thanks to a number of minor aesthetic tweaks, most prominently the Thor's Hammer headlights, which make this the first car in its segment to get LED headlights standard across the range.

Where the V40 really stands out, particularly for those who'll be using it to ferry their family about, is in its standard safety specification. Even on the entry-level Momentum trim, Volvo's 'City Safety' package is fitted as standard. It's an autonomous emergency braking system that works between two and 31mph. According to Euro NCAP records, all cars it's been fitted to have achieved five-star safety ratings.

Plenty. There are many established names in this sector such as the BMW 1-Series, Audi A3 and Mercedes-Benz A-Class, but the V40's premium edge helps it rise above those offerings.

Volvo considers it a classier rival to the Volkswagen Golf, and to that end it succeeds. Those looking for a more interesting alternative to the German car are well served here as you get more for your money and a vastly more interesting interior.

While the likes of the XC90 are built on Volvo's own Scalable Product Architecture, the V40's platform is derived from the current Ford Focus chassis. That's no bad thing, though, as the Blue Oval's offering has always been known as one of the best handling models in the segment.

This pedigree is evident as the V40 is a wonderfully smooth drive and won't shame itself if you find a twisty back road and want to have fun.

The range of engines offered also raise no complaints. The diesels are smooth and torquey like all the best modern diesels are, avoiding the grumbly, agricultural feel of older units from marques like Ford. We were a little concerned that the D2 engine might feel underpowered, but at no point were we left feeling like we needed more oomph.

As it's Volvo's best-selling model, it's no surprise that the refreshed V40 focuses on evolution rather than revolution. However, that evolution has made an already attractive proposition even more enticing.

With the new D2 engine, those looking to save on running costs are well served, and even though it's not trying to sell itself as being fun to drive, there's just about enough to keep keen drivers happy.