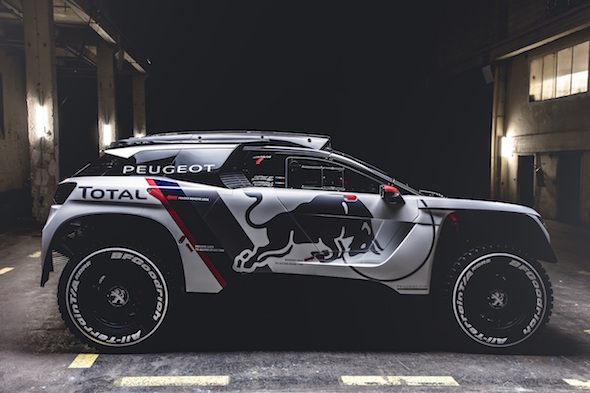 Peugeot has pulled the wraps off its latest, and most extreme, Dakar challenger yet.

The 3008 DKR is based on the French carmaker's all new SUV of the same name, which is due to make its debut next month at the Paris Motor Show.
The previous DKR – based on the smaller 2008 model – saw Team Peugeot Total and Red Bull storm to success in both the Dakar and Silk Way Rallies this year.

For it to be able to conquer the high-speed, high-altitude Dakar Rally, the 3008 DKR has undergone extensive development work. This took place in Velizy, France, over the eight months since the 2016 event finished in Rosario, Argentina.

Peugeot reveals its 3008 DKR
Up Next

Mechanical strength and engine management have been the focus of extensive revision, in order to improve the model's reliability.

Meanwhile, the car's 3.0-litre V6 twin-turbodiesel engine has been improved to provide greater torque at low revs, and further development has gone into the suspension geometry and dampers.

Finally, air conditioning in the car has seen a revamp, which will allow crews to better perform in the intense heat, which can hit 40 degrees during some of the arid desert stages.

"The new 3008 symbolises the next step," said team director Bruno Famin. "Our goal with this car was to take the weaker points of the existing car and make them stronger, while capitalising on all the existing strengths to improve them still further."
Tags
Read Full Story Click here to comment

Should I cut ties over my friend&#39;s seemingly homophobic comment?