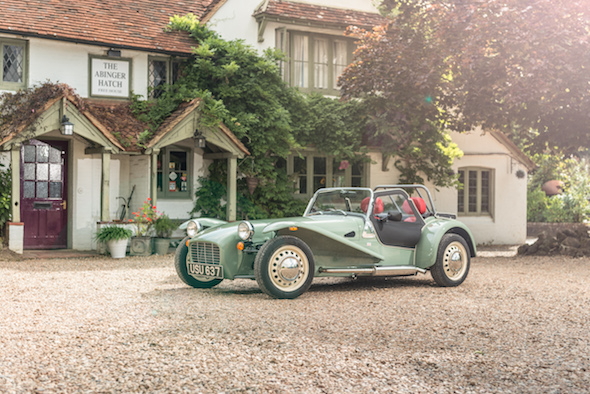 British carmaker Caterham is harking back to its heritage with the release of a retro Seven.

Unveiled on Friday at the Goodwood Revival, the Seven Sprint promises to be the retro roadster of every Caterham purist's dreams.
Featuring flared front wings, a polished exhaust silencer and uniquely styled rear lights, the model has been launched ahead of next year's '60 Years of the Seven' anniversary.

The open-topped car will be powered by the 80hp, three-cylinder Suzuki engine featured in Caterham's entry-level Seven 160 model. However, that's where all similarities with the modern Seven ends.

To continue the model's authenticity, its chassis is powder-coated grey, making it period-accurate for a Series 2 Lotus 7.

A wooden-rimmed sports steering wheel and wood-effect dashboard take pride of place in the cockpit, complementing the hand-stitched scarlet Muirhead Scottish seat upholstery. Of course, the instrument layout is in a classic format, with the tachometer even featuring red and yellow sectors, in true 1960s style.

Caterham unveils retro Seven
Up Next

Caterham Cars chief executive Graham Macdonald said: "We have always prided ourselves on continually developing the Seven during the 44 years we have been custodian of the model.

"But we never wished to dismiss our heritage either, and I know there are plenty of Seven purists and aficionados out there who will really appreciate the level of detail we've gone to with the Sprint to resurrect the spirit of those early cars.

"It's a car that has been built today, with all the benefits that modern engineering brings with it but with the essence of the Swinging '60s, and is the perfect precursor to our 60th-anniversary celebration in 2017."