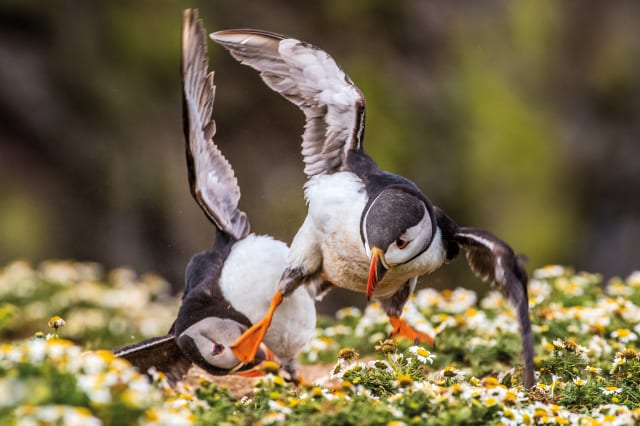 A striking image of young fish taking refuge among the stinging tentacles of a giant jellyfish has scooped the top prize in this year's British Wildlife Photography Awards.

Photographs of seeds caught in a cobweb, close-ups of baby spiders and tadpoles, a black and white image of a bird flying past a skyscraper lost in fog and a series which follow a weasel through the season were among the winning shots.

See also: These beautiful photos prove that animals have emotions

George Stoyle, from Muston, North Yorkshire, won the overall prize of £5,000 for his image of a huge lion's mane jellyfish and its Hitchhikers shot in the sea off Scotland during a project to assess the biology of major sea caves off remote UK islands.

He said: "At the end of one of the dives I was swimming back to the boat when I came face-to -face with the largest jellyfish I've ever encountered.

"As I approached cautiously I noticed that a number of juvenile fish had taken refuge inside the stinging tentacles."

David Nussbaum, chief executive of WWF-UK which sponsored the coast and marine category in the awards, which Mr Stoyle also won with his photograph, said the competition celebrated the "diversity, splendour and drama" of UK wildlife.

"This year's winning image is a striking example of the natural beauty and variety of life we have within and around our shores, as well as the skill and artistry of our wildlife photographers.

"The photo exquisitely captures the voluptuous frills and folds, and kaleidoscope colours of this giant jellyfish.

"But it's the jelly's piscean 'stowaways' that make this picture, a shoal of shimmering, glistening juvenile fish finding safe harbour amongst the tangle of tentacles," he said.

Pictures were awarded in 15 categories, including an urban wildlife section won by an image of a starling on a supermarket trolley and a documentary series which recorded efforts to track rare harvest mice.

In the junior categories, 18-year Rebecca Bunce from Reading won for her Kung Fu Puffins shot of the seabirds tussling on Skomer Island, Pembrokeshire, Wales, and 10-year-old Seren Waite from London scooped top prize for a shot called Cygnet with Swan.

The winning images, video and highly commended entries can be viewed at http://www.bwpawards.co.uk.

CHECK OUT SOME OF THE BEST ENTRIES IN OUR SLIDESHOW BELOW!

British Wildlife Photography Awards 2016
Up Next