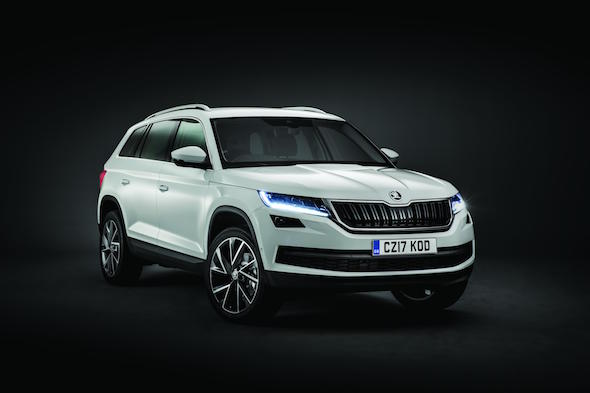 This is the new Skoda Kodiaq, a new SUV built to take on the likes of the Land Rover Discovery Sport and Kia Sorento.

It marks Skoda's first foray into the large SUV market, and the Czech manufacturer says this is the beginning of an 'extensive SUV campaign'. It will be available in both five- and seven-seat configurations and will offer class-leading boot space of up to 720 litres.
Skoda is aiming to undercut rivals on price while using its access to the VW Group's range of platforms and engines to ensure that doesn't mean quality suffers.

The Kodiaq uses VW's MQB platform, which is also used by vehicles as diverse as the VW Touran, Seat Ateca and Audi TT. This has helped keep weight relatively low – it's less than 1.5 tonnes in its lightest form.

Skoda reveals the Kodiaq, its first large SUV
Up Next


There will be five engines from launch. A 2.0-litre TDI diesel will be available in 148bhp and 188bhp forms, while there are two 1.4-litre and one 2.0-litre petrol engines. At the vehicle's unveiling, a Skoda board member hinted that a 240bhp performance diesel version is on the cards.

Three transmissions will be offered in the form of a six-speed manual and six- or seven-speed automatics. The latter will utilise VW's dual-clutch transmission, which has never been used in a Skoda before.

The all-wheel drive system is available on most engines and promises to give the Kodiaq genuine off-road capabilities. Customers selecting this drive option will also get an off-road setting in the optional Drive Mode Select menu.

Skoda Kodiaq deliveries are expected to begin in early 2017 and it will cost from around £23,000.
Tags
Read Full Story