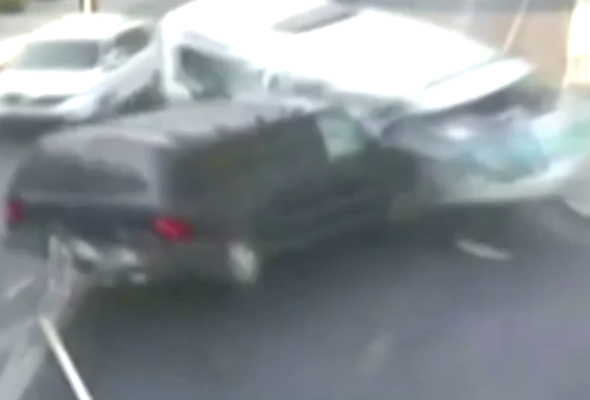 This is the incredible moment a pedestrian somehow escaped unharmed after a Jeep collided with a minibus in Turkey.

The incident occurred in the tourist resort of Marmaris and shows the moment a minibus cut across the path of a fast-moving Jeep.
The 4x4, which was towing a trailer at the time, smashed into the side of the bus and sent both vehicles careering out of control towards the pavement.

The bystander, who was leaning against a fence at the time of the crash, was just inches from the minibus as it passed. Somehow, a door that was flung open upon impact didn't wipe him out.

Three people were hurt in the crash. Unfortunately, Jeep driver Ahmet Cetin, 39, was taken to a private hospital, while the driver of the minibus, Nejdet Akif Yilan, and a passenger, Emine Akca, were taken to Marmaris State Hospital.

Mr Akca was thrown from the minibus during the crash and is reported to be in a critical condition. Police are investigating the incident.