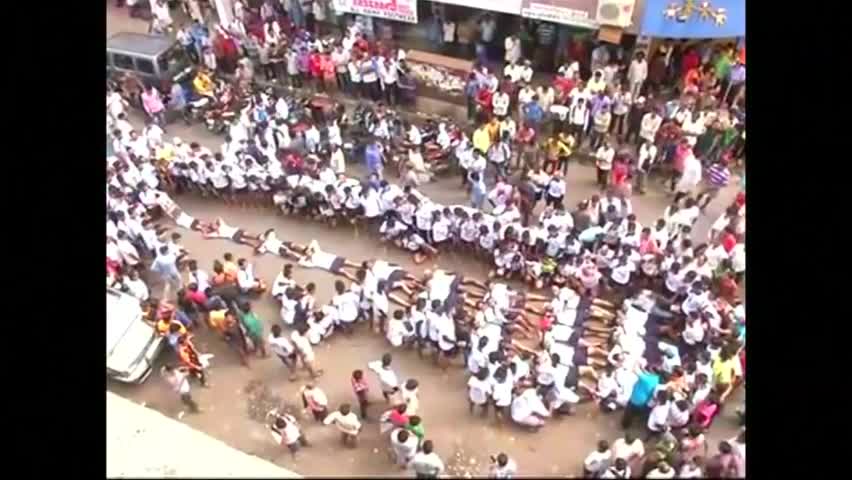 India's Supreme Court on Aug. 17 upheld a lower court's decision banning youths under 18 from participating in the ritual and restricting the height of the human pyramid to 20 feet (6 m).

The pyramids invoke Krishna who, according to tradition, formed human pyramids with friends to break pots of butter or curd hung from the ceilings of houses so that they could steal the contents.

Maharashtra's ruling Bharatiya Janata Party (BJP) said that it would ask the court to reconsider its order.

"Government has taken note of all the feelings. We will once again approach the court but this time we have to respect the court and we have to take people with us," said BJP leader Kirit Somaiya.

In Mumbai, Krishna devotees lay on the ground in a human chain to protest the court order. Another group used a ladder to reach a curd pot and raised black flags in a show of protest.

Hundreds of people are injured every year while forming human pyramids as competition builds up to see which group can make the highest pyramid. Children are used to climb to the top levels without any safety harnesses.

Dangerous local traditions
Pamplona's annual festival of San Fermin, or the Running of the Bulls, takes place between 6 and 14 July, and sees thousands of people congregate to watch locals dressed in white with red handkerchiefs around their necks as they run a length of 825 metres alongside bulls. The most dangerous part of the bull run is a closed curve which is also the longest stretch. Since 1924, 15 people have died and over 200 have been seriously injured at the event.
Daredevils with a passion for cheese come from all over the world to hurl themselves down a perilously steep, grassy Gloucestershire hill in pursuit of a 4kg Double Gloucester cheese. The tradition of Cheese Rolling at Cooper's Hill dates back to medieval times when presumably there was nothing else to do. The winners take home the cheeses as well as a few cuts and bruises.
Every winter, the people of Annapolis brave the freezing water at Sandy Point State Park for the Annual Maryland State Police Polar Bear Plunge. More than 10,000 people from around the region run into the frigid waters of the Chesapeake Bay to raise money for Special Olympics Maryland.
On the Greek island of Chios, a Rocket War takes place every Easter between two rival church congregations in the town of Vrontados. Tens of thousands of home-made rockets are fired across town, with the aim of hitting the bell tower of the opposite church. Some rocket builders have lost their lives preparing for the battle.
Villagers in Solapur take part in a bizarre ritual which sees babies being tossed from a 5ft-tall plinth on the Baba Umer Dargah Shrine. The babies land on canvas held by villagers and hundreds watch as the screaming infants are dropped from the concrete plinth. The centuries-old ritual is believed to bring prosperity to the infants and families.
Onbashira festival participants ride a huge log down a steep hill in a Japanese ritual which has taken place for the past 1,200 years. The timber logs are used as sacred pillars for the Suwa Grand Shrines of Kamisha and Shimosha, which are re-built in Suwa City. The lumbers' journey down the mountainside often results in injury and fatalities.
At the San Juan bonfire festival in Northern Spain, revellers take part in a strange ritual which consists of stepping barefoot on hot coals without burning the soles of their feet. They usually carry someone on their back during the festival, which celebrates the arrival of summer.
To celebrate the New Year in Russia, Siberian divers cut a hole in the thick ice covering Lake Baikal and dive to the bottom while carrying a New Year’s tree. The water in the world's oldest and deepest lake is freezing and the air temperature near Lake Bailak reaches around -25C.
Dangerous delicacy fugu, or blowfish, is widely consumed in Japan even though it is known to be more poisonous than cyanide. The smallest mistake in preparing it can leave diners in hospital or even kill them. The fish's toxic internal organs must be removed by a licensed chef before it can be served.

Baby jumping (El Colacho) is a traditional Spanish practice dating back to 1620 that takes place annually in the village of Castrillo de Murcia, near Burgos, to celebrate the Catholic feast of Corpus Christi. During the act, known as the devil's jump, a man dressed as the devil jumps over babies who lie on mattresses in the street.

One of the most bizarre and painful coming-of-age rites is followed by the Satere-Mawe Tribe in Brazil, who use intentional bullet ant stings for boys to become warriors. The ants are submerged in a natural sedative, before hundreds are woven into gloves made of leaves. Once the ants regain consciousness, a boy slips the gloves onto his hands and must keep them on for 10 minutes. The boy's hands are left paralysed due to the ant venom and he can shake uncontrollably for days. The bullet ant, named because the pain it causes is similar to being shot, can bite multiple times per second.