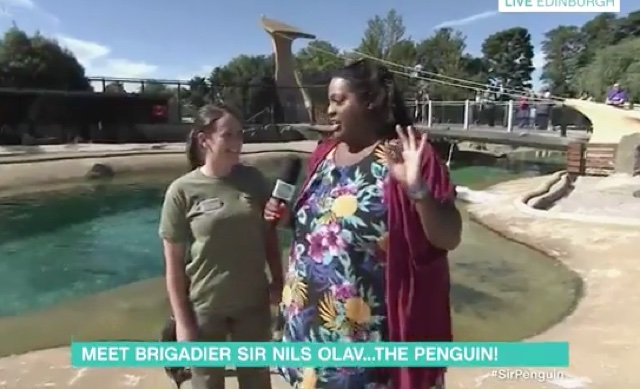 This Morning TV presenter Alison Hammond was left a little flustered during a live interview - as a penguin bit her just seconds before the camera panned to her.

Alison was at Edinburgh Zoo doing a piece on a "military penguin" when the incident occurred.

A King penguin at the zoo who has been a mascot to the King of Norway's Guard since 1972 has been officially made a Brigadier.

His Majesty the King of Norway's Guard paid a very special visit to bestow the title of Brigadier to one of Edinburgh's most famous penguins, who will now be known as 'Brigadier Sir Nils Olav'. See more on that story in the video at the bottom of the article.

Eammon Holmes and wife Ruth introduce her piece and Alison says: "Hello, literally before you just came to me, I just got bit by a penguin.


She struggles to continue with her interview and says: "I have got to interview this lovely lady, she's Dawn – one of the zoo keepers."

But adds: "But I am really, like, panicking now, I'm having a panic attack – do they normally bite like that?"

Dawn replied that the animals were young and a bit excitable.

Alison later tweeted a picture of herself "making up" with the penguin that nipped her.

Me and the penguin that bit me , yes bit me , making up . He said sorry @itvthismorningpic.twitter.com/gjhggW8uh2