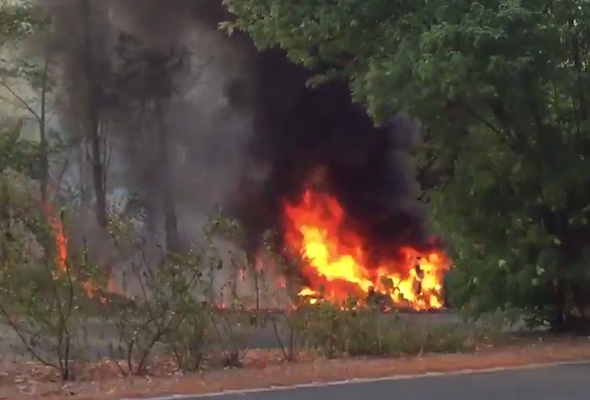 A Tesla Model S has been filmed being consumed by flames following a test drive that went wrong in France.

The electric car caught fire during a promotional event with a Tesla employee in the passenger seat. Reports say that the three occupants heard a loud bang, prompting the driver to pull over.
After noticing smoke, everyone got out before the car burst into flames. Fortunately, no one was hurt in the incident.

Tesla says it is working with authorities to discover the cause of the fire, but reports say that the driver saw a 'problem with charging' message on the dashboard before stopping.

The electric car manufacturer was investigated by the US government in 2013 after two of its cars caught fire in similar circumstances. However, the investigation was closed after Tesla raised the suspension and fitted a titanium shield to protect the batteries.

Electric car fires make headlines due to the relatively new technology being used, but there is no evidence to suggest they are more susceptible to fire than cars with traditional internal combustion engines.