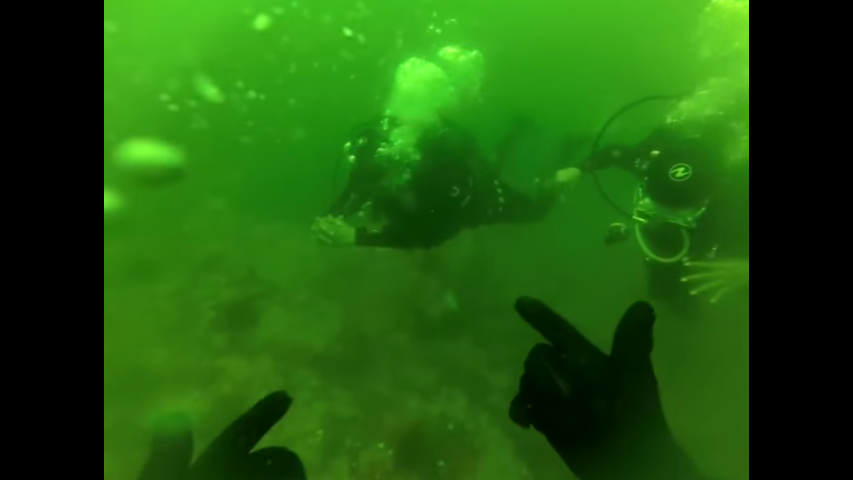 A quick-thinking scuba diver prevented a possible drowning off the coast of Cape Town, South Africa, when he spotted a dive companion panicking during ascent.

Video of the incident, uploaded in January 2015, but only later going viral, on August 11, 2016, shows a woman pulling off her mask and regulator.

Steve Gerber, who shot the video and came to the woman's aid, described the incident to Storyful, writing: "She would have drowned as her buddy was just as inexperienced as she was."

"Due to the bad visibility we got separated from the dive master," Gerber wrote.

"I just tried to keep everyone together and decided to ascend. After communicating this through to all the members and starting the descend I noticed that she was not ascending and could see she was starting to panic.

"I actually started to swim towards her before she ripped off her mask and regulator."

The video ends with the group reaching the surface of the water and although she's clearly gasping for air, the woman appears to be safe.

The video, which was posted to YouTube originally has since been viewed more than 225,000 times.

World's most dangerous tourist attractions
Trolltunga, or Troll's Tongue, is one of the most famous tourist sites in Norway and it's not hard to understand why when you see the slab of rock perched on top of a cliff overlooking the stunning lake Ringedalsvatnet. This rock sits 700 metres in the air, making it an exceptionally dangerous vantage point especially given lack of guard railing around the cliff. Even the hike to get to the rock takes around 8 to 10 hours and ascends 900m. An Australian woman fell to her death from the point this year, it's thought this is the first recorded death at the site.

El Caminito Del Rey, aka the world's most terrifying walkway, reopened this March after being closed for 14 years because of a number of deaths. El Caminito Del Rey is more than three kilometres long and runs along the dangerously steep walls above the Desfiladero de los Gaitanes gorge in Spain.

The North Yungas Road (also known as 'Death Road') is a 69 kilometre long road in the Yungas region of Bolivia and is one of the world's most dangerous roads. The way is known for its extreme danger thanks to the instability of the ground and lack of barriers keeping vehicles away from the 600 metre drop. A number of people have fallen victim to the road over the years and cross markings adorn the road. More than 200 people are killed on the road each year, according to some estimates.
When Reactor 4 at the Chernobyl Power Plant exploded radioactive particles were sent into the air around Chernobyl and the nearby town of Pripyat. However, despite the obvious danger that still remains at the site, thousands visit each year. The contamination levels are now low enough to allow brief, regulated visits but visitors may only eat food brought from outside and are warned against sitting on the ground and walking on the grass due to the radiation levels. A number of companies offer both private and group tours to the area.

Miyakejima sits above a chain of volcanoes in the Pacific Ocean and in the past 100 years the volcanoes have erupted six times. As a result, huge clouds of ash and toxic sulphur dioxide filled the air, making a large proportion of the land uninhabitable. The island was evacuated and remained empty for five years but in 2005 people began to return. Now nearly a third of the island is off-limits thanks to the poisonous gases and residents and visitors must wear gas masks to protect themselves against the toxic air.

This eight-day festival honours Saint Fermin and began in the 14th century. Six bulls are released onto the streets of Pamplona where they run for 825 metres along with those people brave (or crazy) enough to step in and join them. More than 20,000 people take part throughout the week and as many as 100 people are injured each year. There have been 15 deaths at the hands of the bulls since 1910.

Climbing to the summit of the Half Dome in Yosemite National Park is one of the most famous day hikes in the United States, but thanks to its popularity the area is often crowded, with scores of tourists waiting their turn to reach the peak. The almost vertical climb to the top has cables to help hikers make their way to the top. According to hikehalfdome.com the peak sees an average of 12 - 15 deaths each year.

Boiling Lake in Dominica reaches extreme temperatures of 82–92C. There is no road that leads directly to the lake, but that doesn't stop visitors making the eight-mile hike past sulphur springs and through gorges to get there. The air around the lake is hot and steamy, tinged with an unpleasant smell of sulphur. Small sprays of steam are frequently shot from the lake and burn exposed skin.
Alnwick Castle is one of the most popular tourist attractions in the north of England but there's another site in the area which is a little more thrilling. Visitors are wise to heed the warning on the gates at the Poison Garden as some of the plants found in the garden have the potential to kill. The Duchess of Northumberland created the garden with a view to educating the public on some of the world's deadliest plants. Poisonous plants found in the gardens include strychnine and castor oil seeds.

The rickety wooden plank path that runs along the edges of Mount Hua Shan has been described as the most dangerous hike in the world - and it's not hard to see why. There are few handholds along the path and at one point the planks fall away entirely, leaving walkers to make their way using footholds in the rock. It's thought that approximately 100 people lose their lives each year on Mount Hua Shan.