US military drops Humvees from planes 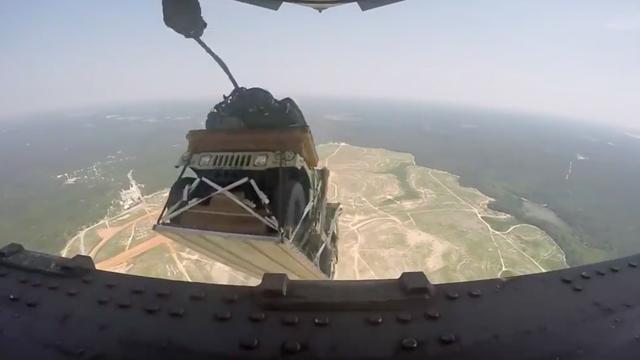 In footage worthy of a Hollywood blockbuster, the US military has revealed exactly what happens when it drops 2,500kg Humvees from a plane.

United States Air Force members from the 16th Airlift Squadron at Joint Base Charleston, South Carolina, were filmed executing the parachute air drop of eight Humvees from a C-17 Globemaster III.
Thanks to a number of well-placed action cameras, the aerial manoeuvre is shown from a variety of different angles, as the military convoy vehicles fall to a drop zone in Fort Bragg, North Carolina.

The smooth operation begins on the ground as the airmen load the Humvees, which are strapped to pallets, onto the plane.

After the plane has taken off, the rear door is opened and the cars begin to slide out one-by-one.
The parachutes are opened via a static line system as they exit the plane, and within seconds the next one is out the door.

The incredible video ends as the Humvees come to a not-too-gentle landing, and the plane shuts its door and returns to base.
Tags
Read Full Story Click here to comment