Great British bucket list: Things to do in the UK before you die 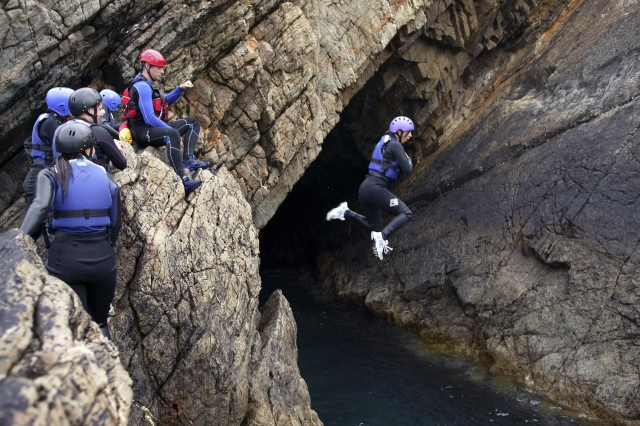 Britain is filled with amazing places, outstanding experiences and terrific sights to see before you die. With splendid mountain scenery, incredible coastlines and an array of vibrant cities, there is enough for you to spend a lifetime exploring the best of the UK.

SEE ALSO: The ultimate travel bucket list: 50 places to see before you die

SEE ALSO: How well do you know these British landmarks?

With a whole host of adventures, cultural sites and natural wonders you won't find anywhere else in the world, there is no better place to escape than right here at home.

England, Wales, Northern Ireland and Scotland each have their unique treasures and landscapes that make for an epic holiday in Britain. From coasteering in Pembrokeshire to witnessing the Northern Lights in Caithness or the Galloway Forest Park, we've picked some of the most unforgettable things to add to your travel bucket list.

Whether you're searching for Britain's best drive, the finest view in England or a surprising city break, there's an experience for you. In Northern Ireland, you can enter the world of fantasy by visiting the Dark Hedges, or visit the world's oldest occupied castle in Windsor, England. A tour of the works from the world's most notorious graffiti artist is a must in Bristol, while the Gobbins Coastal Path is an excellent alternative to the Giant's Causeway.

Explore our pick of some of the best things to do in the UK and tick off your holiday bucket list.

15 PHOTOS
UK bucket list: Things to do in Britain before you die
See Gallery

UK bucket list: Things to do in Britain before you die
Adventure types shouldn't miss Wales' breathtaking Pembrokeshire coast where you can try coasteering, an activity first developed by surfers and kayakers in the 1980s. It involves working your way along the coastline at sea level by climbing, diving, swimming, scrambling and rock hopping. With stunning views, dramatic coastline and fabulous beaches, Pembrokeshire is a top spot for coasteering.

Whether you're a Game of Thrones fan or lover of all things surreal, The Dark Hedges in Co. Antrim is an Insta-perfect avenue of beech trees that will make you feel like you are part of a fairytale. A location for the hit fantasy series, the mysterious tunnel of trees dates back to the 18th century when it was planted by the Stuart family to impress visitors on their approach to Georgian mansion Gracehill House. After two of the magnificent 200-year-old trees were knocked down by storm Gertrude in 2016, wood from the fallen trees was turned into unique crafted doors which you can view at ten specially-selected pubs across Northern Ireland.

Billed as Scotland's answer to Route 66, the 516-mile North Coast 500 route covers the stunning coast of the northern Highlands, with its beautiful beaches, idyllic coastline views and delicious food and drink stops, such as Cocoa Mountain in Durness. So get your best pals together for the ultimate Scottish road trip, ensuring you take in the highlights which include a tiny castle, several towering Munros, a mystical sea cave and more.

With a history spanning 900 years, Windsor Castle is the oldest and largest occupied castle in the world. To appreciate its full majesty, take a stroll down the three-mile Long Walk between the castle and Snow Hill in Windsor Great Park before turning around to admire the iconic view of the castle from afar. Over 500 red deer roam freely around the Deer Park enclosure and often pose nicely for photographs. The Long Walk is still used by the royal carriages as part of the route from Windsor Castle to the Ascot Races and over the years, the elms have been replaced by oak, horse chestnut and London plane trees.
Few feats top completing the Welsh 3000s Challenge which involves surmounting the country’s 15 highest peaks, each of them over 3,000ft. Only for the super-fit and experienced walkers, this Snowdonia-crossing challenge in North Wales has Snowdon itself as a common starting point before the course is walked or ran. The record is a mere four hours and 20 minutes but those who take on the climb have 24 hours to complete the 30-mile trek.

The world’s most notorious graffiti artist might have made his satirical graffiti mark all over the world but Bristol is where it all began. Banksy’s native city is one big bold urban gallery and to really get under the skin of the artist and Bristol's street art scene you’ll need to head out of the centre. Stoke’s Croft, the heart of Bristol’s cultural quarter and home to Banksy’s Mild Mild West mural, is a good place to start but it is Easton that is a haven for fans. Here you’ll find some of his earliest works such as Cat and Dog on Foster Street and the famous Masked Gorilla on Fishponds Road.

It sounds like something out of Indiana Jones, but it’s true. Visitors to Scotland can experience a unique beach escape on a truly special inhabited island while enjoying one of the most scenic and unusual landings. Loganair operates flights from Glasgow and Benbecula to Barra, where Traigh Mhor, a two-mile cockle shell strand serves as the island's runway. Flights work to a flexible timetable as the runway disappears twice a day under the incoming tide. Once you arrive, stroll along the beautiful white sand beaches, cycle around the tiny island or go on a guided kayak tour.

The A591, or 'Britain’s best drive', stretches between Kendal and Keswick in Cumbria, and is home to some of the world’s most jaw-dropping scenery. Those making the 45-minute journey are rewarded by no fewer than five dramatic Lakes, dozens of world-famous mountains and some of the most idyllic places on the planet. This drive ranks so highly because of the impressive views of five lakes - Windermere, Rydal, Grasmere, Thirlmere and Derwentwater – which can all be seen from the road, as well as the magnificent mountain scenery including the Langdale Pikes, Helm Crag and the glacial valley of St John’s in the Vale. Capture the moment at Rydal, a great stop for photos, and take in some of the best views from The Lion and the Lamb Mountain from Grasmere.

Parachuting from as high as 12,000ft provides an incredible thrill – and that’s without seeing the beautiful Gower Peninsula sprawled beneath you. On a tandem skydive in Swansea Bay, you can freefall at 120mph while attached to a fully-qualified instructor. After 45 seconds, they will, quite literally, pull the strings to deploy a parachute at 5,000ft for you to float back to Earth. Not for the faint-hearted, parachuting over the Gower Peninsula affords unparalleled views of the UK’s first Area of Outstanding Natural Beauty, from the wild moors and limestone cliffs to golden, sandy beaches.

For a surprising alternative to the UK’s best-known cities, Hull is an ambitious, creative and innovative place for a short break. The UK City of Culture for 2017 is a must-see for arts enthusiasts thanks to its historic old town and cultural venues. Vibrant Hull was built on its connection to the sea and is home to a buzzing quayside, maritime museums and eclectic shops. The Deep, a ten-metre-deep aquarium filled with sharks and stingrays, is its biggest attraction, while there are many unexpected sights for visitors, such as the colourful toads inspired by poet Philip Larkin and cream-coloured telephone boxes.

Lying on the same latitude as Stavenger in Norway and Nunivak Island in Alaska means visitors to Scotland are highly likely to see the Northern Lights and feel very small but equally awe-struck by the magnificent Aurora Borealis. Some of the best places in Scotland to see them during the autumn and winter months on clear nights include Wick in Caithness and Galloway Forest Park, the only Dark Sky Park in Scotland. Aberdeenshire, the Cairngorms, Angus and Rannoch Moor are other top viewing spots.

As one of the most unusual places to stay in Britain, Snowdonia's cliff-camping experience allows you to sleep on the side of a cliff-face with the crashing sea below. Adventurous travellers who dare to pitch a tent in the precarious spot spend the day rock-climbing in North Wales with Gaia Adventures, before discovering their bed for the night: a flat ledge made of super-strong textiles jutting horizontally out of the cliff face. They then abseil to their 'portaledge' and watch the sunset with a mug of hot chocolate, before falling asleep in a cosy sleeping bag to the sound of the sea beneath and the wind whistling all around.

Celebrated author and vet James Herriot gave the view from Sutton Bank the ultimate accolade – 'England’s finest'. Dramatic views soon start to appear as you set off on the flat, one-mile cliff-top walk from Sutton Bank National Park Centre: the lush vale of York and Mowbray, with the Pennine range of mountains and hills brooding in the distance. On a clear day this is a magnificent vantage point, while on a clear night countless stars splash light across the heavens at this Dark Sky Discovery Site. It's a breathtaking spot to see England in all its glory as you blow away the cobwebs with a walk or cycle.
For a dramatic walk in Northern Ireland, look no further than the outstanding Gobbins Coastal Path in Islandmagee, County Antrim, which was first enjoyed by the Edwardians after it was developed in 1902 by visionary railway engineer, Berkeley Deane Wise. The dramatic two-mile long path, part of the famous Causeway Coastal Route, consists of a network of walkways, bridges and water-splashed gantries embedded into the black basalt sheer cliff faces. It features a series of tubular and suspension bridges and offers an exhilarating walk to awaken the senses.

A spectacular World Heritage Site, marching 73 miles from sea to sea across some of the wildest and most dramatic country in England, Hadrian’s Wall is an absolute must-see. Particularly impressive is the Birdoswal Trail, dominated by remains of the Roman frontier and picturesquely set by the River Irthimg. This 30-mile section of Hadrian’s Wall features the best preserved milecastle, a Roman fort which explores life in post-Roman Britain and a priory made from stones found on Hadrian's Wall. Don’t miss the amazing views from Harrows Scar Milecastle and Wall, the longest continuous stretch of wall, and be sure to stop at Sycamore Gap, the solitary tree immortalised in the 1991 Kevin Costner film Robin Hood: Prince of Thieves.