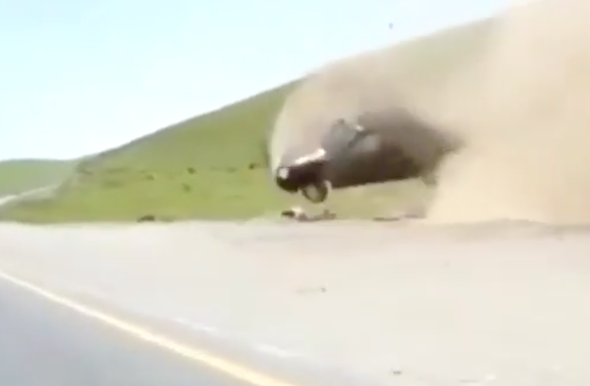 A Russian man is lucky to be alive after flying from his car during a crash, only to have it land on top of him seconds later.

The man was driving his Lada Priora as part of a wedding cavalcade near the village of Kantyshevo in south-west Russia when he lost control and veered off of the road into a ditch.

In footage of the crash, filmed by another member of the convoy, the man's body is seen flying from the vehicle as it rolls.

As the convoy comes to a sudden stop, the person filming runs towards the destroyed car to find the motorist lying half underneath it.

Incredibly, after being pulled from underneath the wreckage, the man climbs to his knees, bewildered.

Following the incident, the President of Russia's Ingushetia ordered that the length of wedding escorts be shortened.

President Yunus-Bek Yevkurov, said: "We should be as strict as possible with the people on this video. Each weekend we should make road raids, and wedding convoys should not exceed two to three cars."

The date of the crash and the man's condition are unknown.