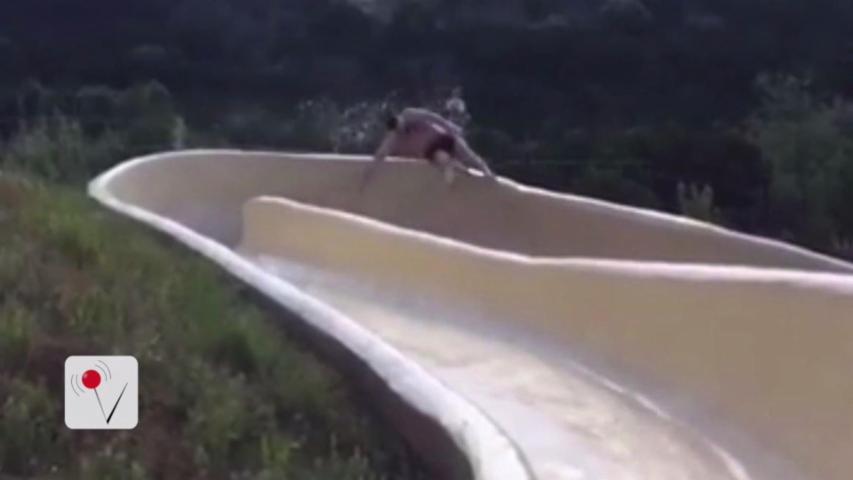 A man from Dallas, USA, nearly lost his life after slipping off a waterslide and over a rocky cliff.

David Salmon was cruising down the slide on his back when he suddenly flew over the edge of the slide on a bend.

He then fell 10 - 15 feet onto the rocky terrain below and as a result he was left with a broken arm, fractured ribs and lacerations covering his entire body.

Salmon posted the video to Facebook on 18 July and has already had more than one million views.

The video came with a comment from Salmon saying: "Too dang old to be going down waterslides. Fell off this one that is over a rocky cliff. First time in an ambulance."

He also stated that he has to spend one more night in hospital before he will be allowed to head back home to Dallas.

See also: Would you dare to ride the world's tallest waterslide?

Comments on the video included one friend who said: "You gave us quite a scare. So glad you don't need surgery!!!"

Another joked: "I guess the upside to this is you might be end up going viral!"

According to a report on Fox4 the incident happened at a home overlooking Lake Travis, not at a water park.

David spoke to Fox4 and said: "I'd gone down it a few times and it is fast but this time I just couldn't slow down, I even threw my arm out but went right over the edge."

He added that after flying over the edge there was a hard crash and then the rest of the incident is blurry to him.

Matt Mazure witnessed the moment and said: "I turned adn I could see him fly up and then he flew out."

David was reportedly part of a large group of friends who had rented the house for the weekend.

He admitted that the situation could have been far worse if he had broken his back or neck and added that the slide could have had higher sides or more protection.

World's best water parks
Found at the foot of Mount Etna, this park ranks among the top Sicilian attractions. The aquatic park at Etnaland has a number of high octane slides and activities for families to enjoy including the Rafting River, Rio Anaconda and the Crocodile Rapids.
Brazil's Beach Park is situated in the coastal town of Porto das Dunas and has a range of water slides catering for people of all ages and abilities. The park is home to a range of attractions and beautiful views of the coastline are visible from the top of the highest rides. The tourist resort also has accommodation, sports facilities and beach restaurants.

Fasouri Watermania is the biggest waterpark in Cyprus and is also home to the largest wave pool in Europe. Popular attractions in the park include the Cross Over Pool, the Triple Tube Slide and the Kamikaze Slide where you can reach speeds of 50km/h. Visitors looking to spend some downtime away from the slides can relax in the Garra Fish Spa or head for a massage in the on-site parlour.

Blizzard Beach, at the Walt Disney World Resort in Orlando, is based on the Disney legend where a freak snow fall melts, leaving snow-less ski jumps filled with water. The main attractions are found on top of 'Mount Gushmore' including Summit Plummet, Runoff Rapids, Melt-Away Bay and many more.
Discover an underwater world at Aquaventure Waterpark which can be found at one of Dubai's biggest and most popular hotels, Atlantis the Palms. Not only will you get an intense adrenaline rush flying down the extreme slides but you can swim with dolphins and sea lions before going on to explore the Lost Chambers Aquarium.
Tropical Islands Resort is housed in a former airship hangar which is thought to be the largest free-standing hall in the world. With white sandy beaches, palm trees and even waterfalls, Tropical World boasts a 200m long beach with balmy waters and even a lagoon.

Siam Park has a Siamese theme and was opened by the Princess of Thailand in 2008. The park's hillside location offers guests lovely views of the island's south coast. Popular slides and attractions include the Vulcano, Wave Palace, the Tower of Power and the Mekong Rapids.

The Wild Wadi Water Park can be found next to the luxury Burj Al Arab and by the side of the Jumeirah Beach Hotel. Based around the story of Juha, a well known character in Arabian folklore, the park offers rides including Tantrum Alley, Ripetide Flowrider and Flood River.
Waterbom Bali, in a garden in the heart of Kuta, boasts world-class slides which wind their way through the stunning tropical parkland. Popular attractions include the Flowrider which gives you the chance to practice surfing on a stationary wave and Double Trouble, a death-defying drop followed by a series of sharp twists and turns.
Marmaris is one of the most popular holiday destinations on Turkey's coast and the Aquadream Waterpark only adds to its appeal. The park is situated on top of a hill granting visitors to the tallest slides some fantastic views before as they plunging into the waters below.
Up Next