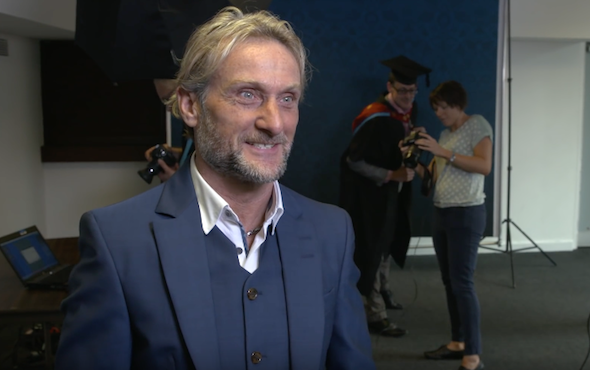 Enigmatic World Superbike Champion Carl Fogarty swapped his motorbike for a mortarboard as he received an Honorary Fellowship from the University of Central Lancashire.

The 51-year-old is the most successful rider ever in his series, with an incredible 59 victories and four World Superbike Championships under his belt. He was made an MBE in 1998.
Most recently, he added another win to his collection when he took the title of King of the Jungle in the 2014 series of 'I'm a Celebrity... Get Me Out Of Here'.

He was honoured for his sporting prowess during a presentation at Preston's Guild Hall last week.

A spokesperson for the university said: "We are delighted to confer an Honorary Fellowship to a sporting great who has a great affinity with our county.

"Carl Fogarty is enormously proud of his Lancastrian roots and his determination to become the best in the world was legendary. To win the World Superbikes championship once was hard enough but to win the title four times is a feat which hasn't been surpassed.

"He has achieved so much success during his career and he is a great example to our graduates and our wider University community."

Fogarty, who goes by the nickname 'Foggy', added: "It's always nice to receive recognition for your achievements and I'm honoured that the University of Central Lancashire chose me to receive an Honorary Fellowship.

"I perhaps should have tried a bit harder with my education so hopefully this award can inspire others to carry on with their studies and pursue their dreams."