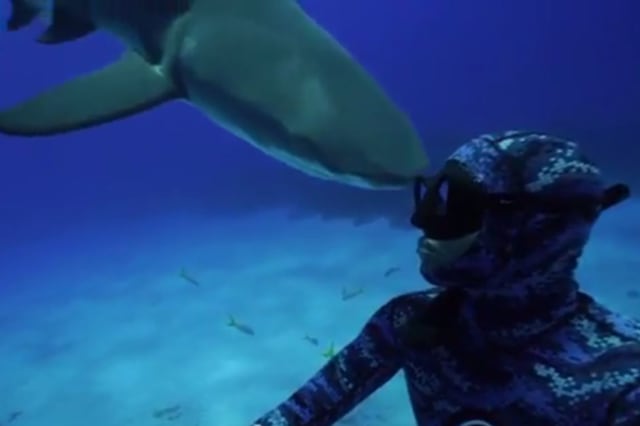 This is the terrifying moment an unsuspecting diver got very up close and personal with a bull shark.

Michael Dornellas was out diving with friends on Tiger Beach in the Bahamas when the hairy moment happened, the Daily Mail reports.

See also: One way to escape from a shark if you're a fish

Dornellas can be seen casually filming underwater when the shark makes a beeline for him, headbutting him with her nose.

The shark hit him with such force he appeared to knock the goggles straight off Dornellas' face as the man recoiled.

He said: "The shark broke my mask and smashed it against my face."

He also mentioned that they later found out the shark was in fact blind in one eye which might explain why she hit him with such force, as she quite possible had no idea he was there.

Dornellas said: "She wasn't trying to bite me or be aggressive. After the collision, she took off – I think I scared her really badly, so I felt bad."

Luckily the scary moment hasn't put him off returning to the water, he managed to fix his mask when back above the water and carried on.

According to National Geographic, bull sharks generally live in 'high-population areas like tropical shorelines' and can even make their way inland through rivers and tributaries.

Sharks and more: Amazing pics of ocean life
Up Next

Are CBD Health Benefits Too Good To Be True?

Snow rescue dogs go through rigorous training in the Alps