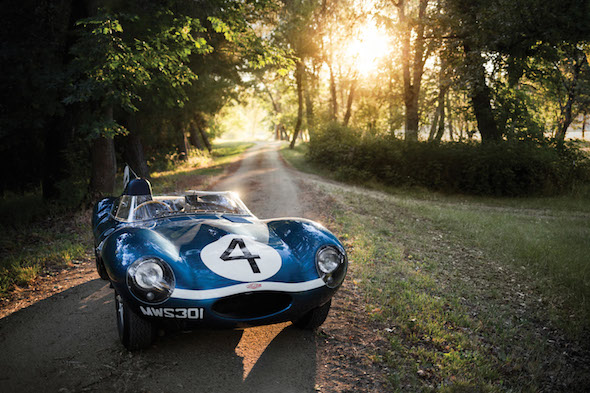 The Jaguar D-Type is an iconic Le Mans racer, and chassis number XKD 501, which won the 1956 running of the endurance race, is going to auction.

In an era where the British manufacturer was dominant at the Circuit de La Sarthe, the Ecurie Ecosse D-Type was the first sold to a private team, and won the '56 race by a lap over the rival Aston Martin, which was driven by Stirling Moss and Peter Collins.
At the hands of Ninian Sanderson and Ron Flockhart, XKD 501 completed 300 laps and the number 4 car was decked out in a dark blue and white livery, matching the colours of the cross of St. Andrew.

As a former Le Mans winner, the Jaguar D-Type was iconic for the large stability fin at the rear and the 3.4-litre straight-six engine produced 250hp, which made it faster than many of its contemporary rivals.

The sale from RM Sotheby's will take place in Monterey, and as one of the most important and valuable Jaguars in the company's history, it is expected to command a very high price.

Le Mans winning Jaguar D-Type on sale
Up Next


The D-Type is recognised as the successor to the famous Jaguar C-Type, which won at Le Mans twice in 1951 and 1953, and began the British dominance of the world-renowned endurance race during the 1950s.

On this D-Type, RM Sotheby's said: "This extremely important Ecurie Ecosse D-Type would crown the finest collections, notable for its history, rarity, and beautifully authentic presentation.

"Not merely a significant and markedly well-preserved D-Type, nor a star in the forefront of important racing Jaguars, XKD 501 can inarguably be held among the most historic British sports cars ever made. It is a legend among legends."