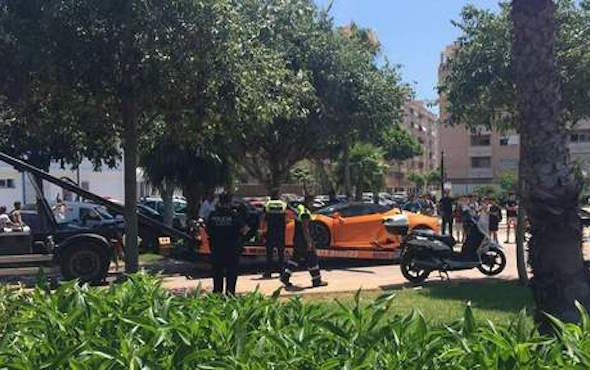 Chelsea FC's brand new £33 million striker Michy Batshuayi has had his Lamborghini Huracan towed in Ibiza after he parked it under a tree.

The Belgian claimed he put it there to keep it out of the sun, but the Spanish police got a tow truck to take the £180,000 away to the impound.
Ibiza's local paper Periodico de Ibiza said the 22-year-old recovered his orange supercar from the impound on Monday afternoon and had to pay a fine to cover the costs of the fine and the tow-truck.

A town hall source told the local news that the car had been rented and was in the name of Batshuayi's brother.

Following on from his promising performances for Belgium at Euro 2016, the former Olympique Marseille striker was on the party island resting and recovering before he will join up with his new Chelsea teammates in the next couple of weeks, as well as the club's new manager Antonio Conte.

Batshuayi posted a video on Instagram of his holiday relaxation, as he had a go on a 'Flowrider' surfing ride. Unfortunately for him he fell off as soon as he let go of his support and the video was captioned "I guess I will never have a pro surfer career."

During the Belgian's campaign in France, Batshuayi scored in the team's 4-0 win over Hungary in the Round of 16, before coming on as a substitute in their 3-1 Quarter Final defeat to Wales.