Man exposes cheating woman after overhearing her at a petrol station 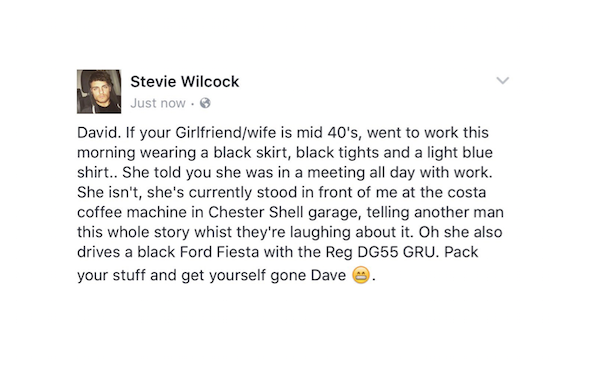 Petrol stations are great spots to overhear sordid secrets, and when one motorist heard a woman discussing her affair while buying a coffee, he decided to share the story.

Stevie Wilcock, from Poulton-le-fylde, Blackpool, was stood behind the woman in the queue at Chester Shell Garage when he heard her conversing with a man.When the conversation turned to their ongoing affair, the 22-year-old thermal insulation engineer found himself unable to just standby and listen. He decided to take to Facebook to warn her unsuspecting husband with a tell-all status.

The post read: "David. If your Girlfriend/wife is mid 40's, went to work this morning wearing a black skirt, black tights and a light blue shirt. She told you she was in a meeting all day with work. She isn't, she's currently stood in front of me at the costa coffee machine in Chester Shell garage, telling another man this whole story whist they're laughing about it. Oh she also drives a black Ford Fiesta with the Reg DG55 GRU. Pack your stuff and get yourself gone Dave."

Wilcock wrote the status on Wednesday in an effort to alert the husband to the deception, and he may well have got the message across thanks to the thousands of shares, likes and comments it has received since.

Some Facebook users are skeptical, however, referencing another recent story, to which his boasts alarming similarities. Others have slammed him for getting involved, calling the post 'nasty not funny', and 'Brutal'.

Defending his actions to the Daily Mail, Wilcock said: "I posted it to give Dave the heads up about his partner. She was being so blatant. Telling her bit on the side that she has lied to him about where she was. There was talk of a hotel as well. It was plain as day.

"It was slightly surreal hearing them talk so open, but they clearly didn't realise this would happen."
Tags
Read Full Story