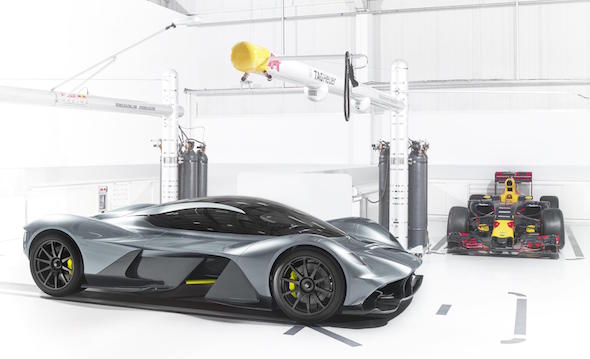 The much-anticipated partnership between Aston Martin and Red Bull Racing has been unveiled. AM-RB 001 is designed to be the most usable hypercar ever made, both on the road and on the track.

The partnership centres around Adrian Newey, Red Bull Racing's Chief Technical Officer and legendary F1 designer, and Aston Martin's top creative team.
Newey has long been revered in Formula 1 for his mastery of aerodynamics and he has brought everything he learnt at the pinnacle of motorsport to the 001.

Most high-performance vehicles are plastered in wings and other aero devices that are compromised by the drag they produce. However, the genius of Newey's design is that most of its downforce is created beneath the car using an aerodynamic theory called ground effect. This utilises the flow of air between the road and the car's floor to suck it to the surface, improving speed and cornering grip.

Aston Martin claims that this technology will provide 'unprecedented levels of downforce in a road-legal car'.


Few details have been announced, but the AM-RB 001 will be powered by a new mid-mounted V12 engine, will be made from carbon fibre, and will feature an innovative suspension design to cope with the increased aerodynamic loads.

Perhaps even more exciting news is that a track-only version of the hypercar will be built, which has set its sights on Le Mans prototype levels of performance.

Speaking on the subject of the AM-RB 001, Newey said: "I've long harboured the desire to design a road car.

"I knew Red Bull Racing had the ability to handle the pure performance aspects, but Aston Martin's experience of making beautiful, fast and comfortable GT cars is of great benefit to the project."

Between 99 and 150 road-going versions of the AM-RB 001 will be built at Aston Martin's Gaydon factory, as well as 25 track-only models. Deliveries are slated to commence in 2018.