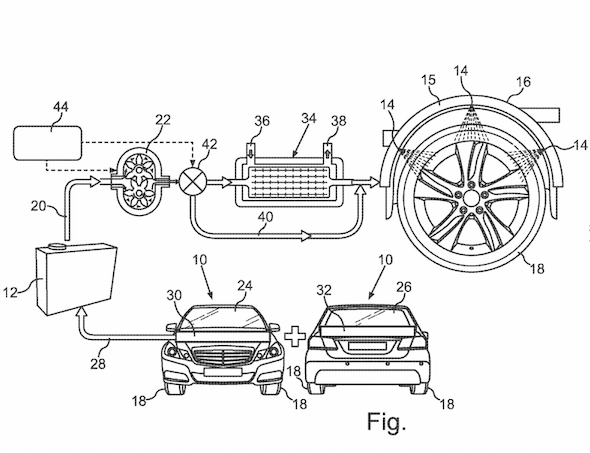 A patent filed by Daimler shows that it is developing technology to control tyre temperatures through water injection.

The tyre is one of the most important parts of the car, as it is the only thing that directly connects the vehicle to the road. Controlling the temperature of the tyre will improve grip and endurance.
The patent shows that Daimler wants to fit a reservoir to the car, which collects rainwater from the windscreen and rear glass. Pipes then run from the tank to the wheel arch, where nozzles can spray water on to the tyre.

Heat-monitoring systems would be installed in the tyre so that the coolant can be sprayed automatically.

The setup also has other uses, such as warming cold tyres in winter or providing extra grip in icy conditions. By reducing the build up of snow and ice on the wheel and in the wheel arch, the tyre can be kept in its optimal temperature range for longer.

Daimler patents tyre cooling through water injection
Up Next


While there are a number of advantages, Daimler acknowledges that during prolonged periods of dry weather, owners would have to buy water and fill the tank manually in order for it to work.

The system would be most useful in places where warm, dry weather is the norm, but that is exactly where its self-filling system is least effective. Daimler clearly feels that the extra expense would be minimal compared to the benefits it brings.

It's unclear whether the tyre cooling system will feature on a car soon, but expect it to debut on the Mercedes-Benz S-Class. The German manufacturer's luxury car is famous for being the first to trial new technology.
Tags
Read Full Story Click here to comment