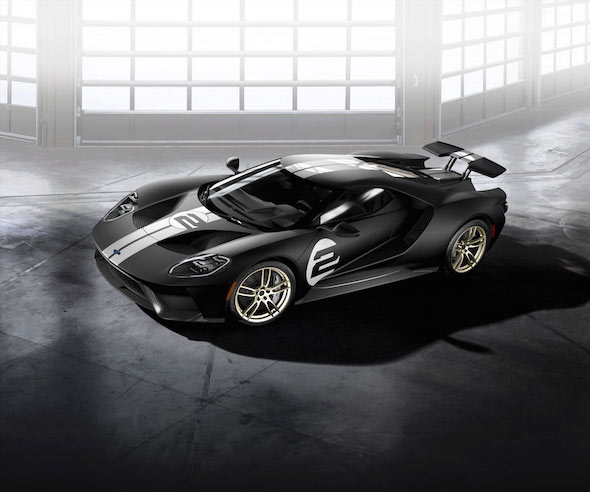 Ford has pulled the covers off a limited-edition of its new GT supercar.

Called the GT '66 Heritage Edition, the new car harks back to Ford's golden age at Le Mans, when the manufacturer took first, second and third with the GT40 in 1966.This special GT has been styled to emulate the famous Number 2 car driven to victory by Bruce McLaren and Chris Amon. It features a Shadow Black exterior in either gloss or matte finish, silver racing stripes and a number two graphic on the bonnet and doors.

That means healthy doses of exposed carbon fibre splashed around, and generous amounts of leather on the inside – wrapping both the carbon fibre seats and steering wheel.


The '66 Heritage Edition will be powered by the same 3.5-litre EcoBoost V6 as the regular GT and will likely make around 592bhp.

"The 2017 Ford GT '66 Heritage Edition is a stunning tribute to the car that kicked off Ford's string of Le Mans victories in 1966."