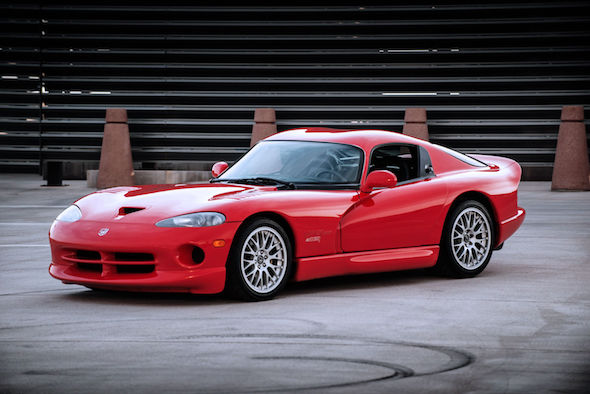 A rare Dodge Viper GTS ACR edition has appeared for sale on eBay.

ACR stands for American Club Racing, and is the name given to just 34 run-out models of the first-generation Dodge Viper. They're considered the most extreme street-legal variants of the American supercar.It gained a reputation for being a handful to drive in standard guise, and in ACR spec they were even more powerful and lighter. Cars built in 2000, such as the one seen here, didn't even have anti-lock brakes.

The 8.0-litre V10 engine that sits beneath the massive Viper bonnet was partially developed with Lamborghini, and made 460bhp. The current owner of this ACR deemed that insufficient, and has fitted a supercharger to make a healthy 600bhp.

Rare Dodge Viper GTS ACR goes to auction
Up Next


The advert claims that it has been set up for 'easy street driving,' and says the engine has been constantly cared for. It is claimed there are no leaks, smoke or any other issues that can blight high-horsepower aftermarket builds. Fortunately, this owner appears to have kept his upgrades relatively simple and high quality.

The exterior styling of the first-generation Viper is iconic. Dodge arguably never quite managed to tread the line between American muscle and elegant exotic supercar quite so well in further iterations.

This car appears to be in excellent condition, and wears the original ACR wheels by BBS. The interior is in similarly fresh condition, with the only addition being a new stereo.

The car is for sale in Tempe, Arizona, and bids have reached $43,000 at the time of writing.
Tags
Read Full Story

Pets At Home to beat forecasts after demand spikes