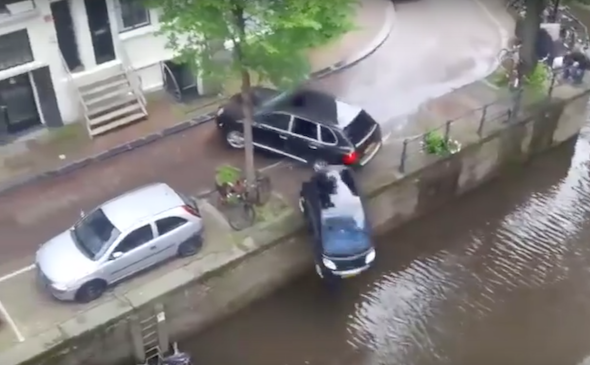 Footage has emerged showing the moment a Porsche Cayenne slides into a parked Smart Fortwo, pushing it into a river.

Filmed on the streets of Amsterdam, Holland, a speed boat is piloted through a canal as a motorbike speeds along a path in the background.
The black Porsche slides around the corner and smashes into the Smart Fortwo, sending it over the edge and into the water. Police cars are quickly on the scene, as the Cayenne makes its escape.

The whole thing appears to be staged for a movie set, as other clips posted to Facebook show the large SUV squeezing past the small car without causing any damage.

It's unclear if the stunt was deliberate, as the Cayenne appears to botch its escape by driving into some steps.

Following the incident, a small crane was deployed to rescue the Smart from the canal.