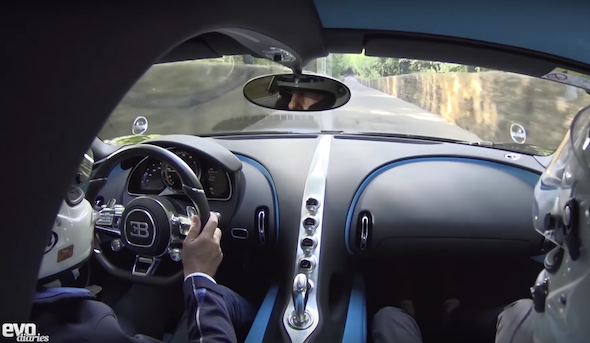 The Bugatti Chiron recently wowed the crowds at the Goodwood Festival of Speed, and now footage has been released from its run up the hill.

The Bugatti Veyron was an incredibly tough act to follow, but the new Chiron does a great job.
The new car's engine is an 8.0-litre W16 making 1,479bhp and 1,180lb-ft of torque thanks to four turbochargers. That means it can go from zero to 60mph in less than 2.5 seconds, and has a limited top speed of just 261mph...

Goodwood's tight hill climb is not the best place to unleash such power, and you can tell the driver is holding back. Even so, the power delivery is clearly savage, as the camera mount struggles to point straight ahead.

The footage also gives us a good look at the new hypercar's interior, which is surprisingly sedate. Just four dials sit in the thin centre console. The interior's dominant feature is the large 'C' shape that cuts between the driver and their passenger.