Shocking moment pedestrian is hit by car caught on camera 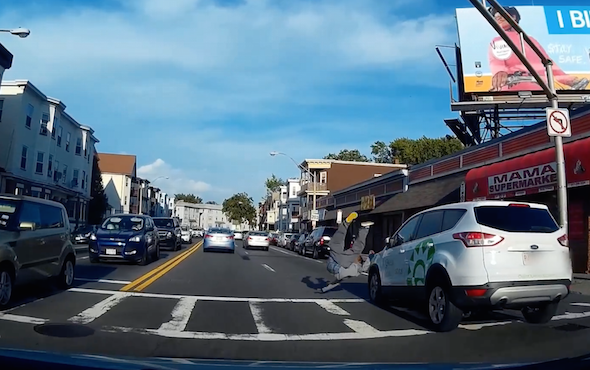 Dashcam footage has shown the shocking moment a car knocked down a sprinting pedestrian in America.

The video, filmed on the evening of June 23, shows cars crossing the intersection of Morton Street and Blue Hill Avenue in Mattapan, Greater Boston.Suddenly, a young man sprints across the road, in front of the filming vehicle, and directly into the path of a 'Quest Diagnostics'-liveried Ford in the far left-hand lane.

With the driver unable to brake in time, the white SUV collides with the pedestrian, propelling him from the bonnet and into the road.

After sitting momentarily on the ground, the youngster slowly climbs to his feet before staggering towards the pavement, accompanied by a man who had come to his aid.

He appears to leave a mobile phone lying on the Tarmac, something that many of the 95,000 YouTube viewers have commented on, questioning whether he had stolen it and was running from the scene of the crime when the collision took place.