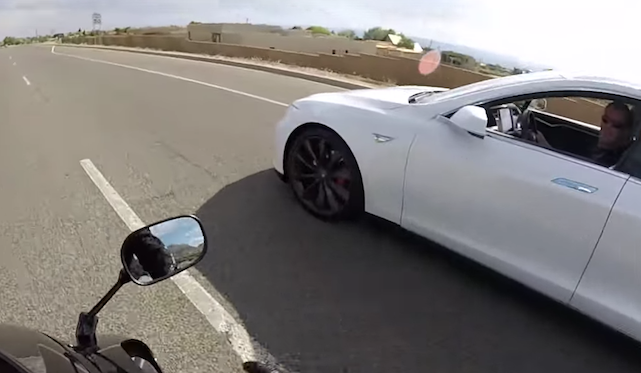 Photo credit: Breaking Moto
A superbike rider was smoked by a driver in a Tesla Model S electric car during an impromptu drag race in America.

Piloting a 600cc motorbike, the rider notices the electric sports car almost immediately. Giving him the thumbs up, he challenges the Tesla driver to a drag race – and he is only too happy to oblige.
On the first run the Tesla completely demolishes the motorbike, with its rider protesting that he was in the wrong gear.

However, even on the second run the results is just as decisive – with the Tesla sprinting off into the distance and leaving the motorbike flailing behind.

Although quite a margin, it was bound to happen given the Tesla's incredible acceleration and torque. Unfortunately for the motorcycle rider, there wasn't much chance against the all-conquering Model S. The newest model of the electric car can reach 62mph in well under 3 seconds, despite being an all-electric vehicle.

This cat does not want to share its food

Duffy says she was ‘raped, drugged and held captive for days’