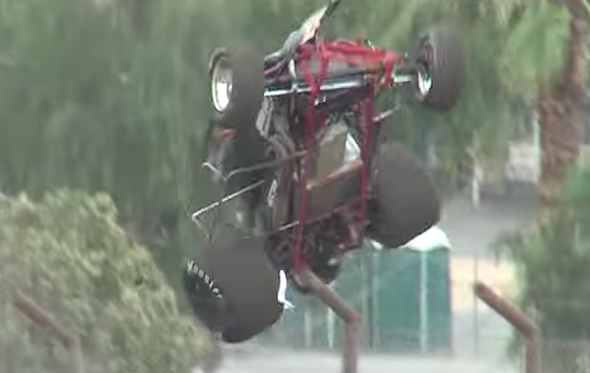 An incredible racing accident has been caught on camera, which saw a high-powered sprint car fly over a 22-foot high safety fence.

Filmed during a qualifying run at Perris Auto Speedway in California, the video shows the V8-powered sprint car racing around the track.
Drifting the powerful machine, driver Austin Williams appears to be in complete control. However, at the entry to one of the oval track's sweeping bends the car's back wheel catches in the dirt and sends it flying.

Flipping numerous times, it is launched up into the air and manages to clear the 22-foot-high guard fence before crashing to earth.

Thankfully, it appears the driver was uninjured after the event and was able to climb out of the car soon after it landed.

According to the racetrack's Facebook, it is the first time that a car had ever crashed over the top of the guard fence.