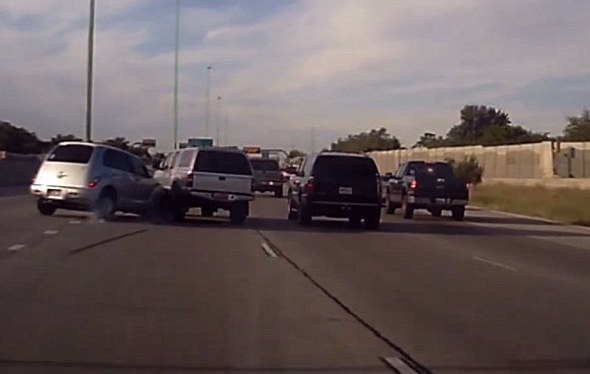 A dramatic crash has been caught on camera in Salt Lake City, Utah, which saw a driver overturn completely on a busy highway.

Filmed on a dashcam fitted to a car travelling behind the two cars in question, the video shows the driver of the silver Toyota Tacoma truck swerve into the silver Chrusler PT Cruiser's lane driving inside them.
As they start to change lanes, without there being nearly enough room to do so safely, the PT Cruiser swerves to avoid the large truck, and in doing so unsettles the car.

Out of control, it crashes into the side of the Toyota, somehow getting underneath it and causing it to flip over.

It crashes into the barrier at the side of the road, and slides on its roof to the middle of the highway. Thankfully, it avoids any other vehicles on the road.

The driver of the truck was taken to hospital with minor injuries, and it is reported that the PT Cruiser driver walked away from the incident with no injuries whatsoever.

This three-year-old swims better than most adults