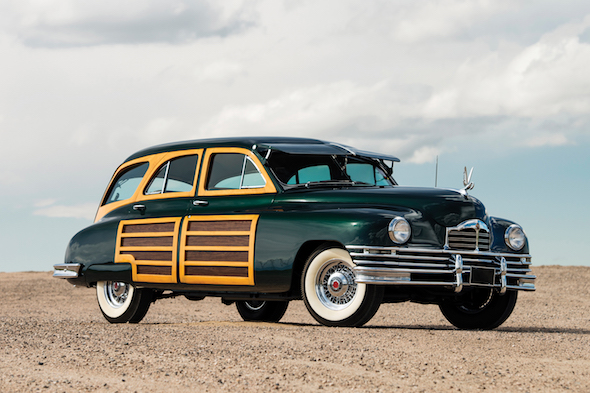 Numerous examples of classic station wagons are heading to auction at the annual Motor City auction at the Concours d'Elegance of America in Plymouth, Michigan.

One of the stars of the show is a 1948 Packard Eight Station Sedan. Featuring a straight six engine, it was the first car on the market to feature a two-piece tailgate. It was also the last 'woodie' models that Packard produced, and as such was done so in very limited numbers.
Fitted with an accessory sun visor and wire wheels, the Station Sedan formed part of a private collection for some time, and was cosmetically restored in 2010 by a specialist in Portland. Even the wood was completely refinished, while whitewall tyres were also fitted to those later-period chrome wheels.

It is completely road-ready, and is offered without a reserve.

Alongside this is a 1950 Ford V-8 Custom DeLuxe Station Wagon, which belonged to Hollywood actor Jon 'Hurricane' Hall. Also a 'woodie', it's a perfect example of 1950's styling and usability crossing over in one car.

Classic station wagons head to auction in Michigan
Up Next


This car has undergone a full overhaul, from its paintwork, which was re-done in original Hawthorne Green, to its dual exhaust. It also features an AM radio, electric clock and – of all luxuries – windshield washers.

It also comes as one of the last cars to feature original wood cladding, as later models were fitted with 'Di-Noc' imitation wood. All of this car's trim is completely original, and includes three-piece sliding windows and an all-wood tailgate.
Tags
Read Full Story