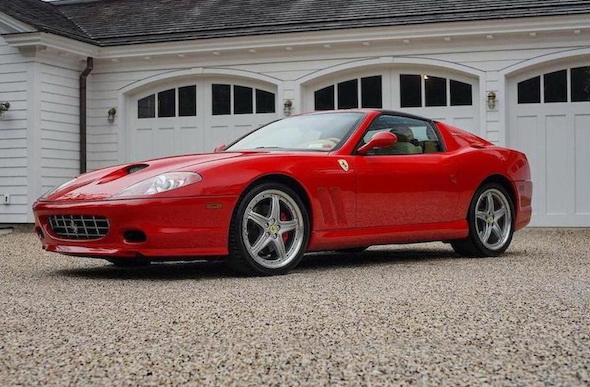 Delivered in November 2005 to a customer in New York, the Superamerica has a powerful V21 engine under the bonnet, producing 515bhp.
Based upon the standard coupe, the Superamerica was a special-edition car limited to just 559 units. The most striking detail of the car is its photo-chromic roof. Drivers are able to adjust the transparency of the glass from within the cabin, allowing different levels of light to enter the interior of the car. On top of this, the Superamerica can be transformed into a fully-fledged convertible at the push of a button, with the entire roof raising or lowering in just 10 seconds.

While a semi-automatic gearbox could have been fitted, this car's owner decided its was best left out – instead opting for a six-speed open gate manual. This is an option that was chosen by just 43 owners.

Incredible Ferrari Superamerica heads to Greenwich auction
@ukcars
Up Next


As well as leaving out the semi-automatic gearbox, the car's owner decided to specify the car with over $10,000 worth of optional extras, including a beige colour leather dashboard and a leather holstered steering wheel. Even the steering wheel's colour was an additional option, coming in brown rather than the standard black.

With just one owner from new, the Ferrari is in incredible condition and has covered just 11,800 miles. Only serviced by official Ferrari mechanics, the Superamerica is certain to be a future classic.

This incredible Ferrari is due to go under the hammer at the Greenwich Concours D'Elegance Auction, with an estimate of between £480,000 and £620,000.
Tags
Read Full Story