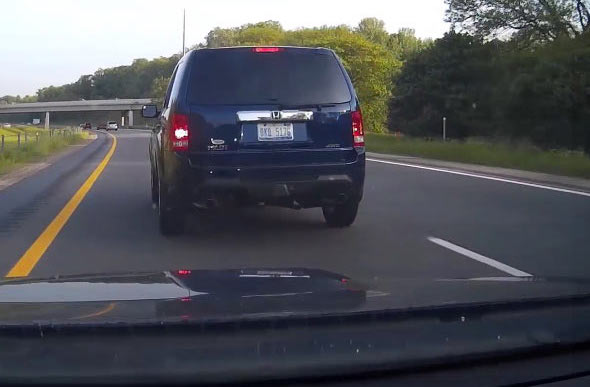 A brake-checking SUV driver caused a nasty high-speed crash while on a highway in America.

The footage, which was captured on dashcam, sees a Honda Pilot travelling down the fast lane of a highway in an undisclosed part of America.
Annoyed by the presence of a car behind them, the Honda brakes suddenly, causing the camera car to also stamp on the brakes.

However, seconds later the Honda tries the same move again – though for longer this time. Unable to slow down enough, the driver of the camera car attempts to swerve around the slowing vehicle but loses control.

This sends them into a massive slide across one side of the highway and then the other, only narrowly missing the Honda which had caused the problem in the first place.

Crashing into the roadside ditch, the camera is dislodged from its mount. However, it's easy to see that the car has been extensively damaged, owing to its severely cracked windscreen.