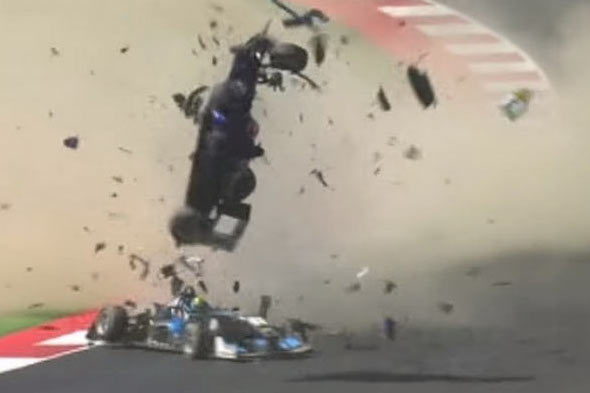 Two racing car drivers were lucky to escape with their lives after a high-speed impact during the Austrian round of the European F3 Championship.

The incident began after American Ryan Tveter span into a gravel trap, eventually returning to the track in a cloud of dust.
Unfortunately, he stopped spinning right at the apex of the turn. With the cloud covering much of the track, his approaching team mate Peter Zhi Cong Li was unable to see the stranded racer – and collided into the back of him.

Li was sent into the air, while Tveter's car was hit from the side by another vehicle driven by Pedro Piquet.

Piquet and Tveter both ended up in the gravel, while Li's car came to a halt after spinning multiple times in the air and crashing to the ground.

Li was airlifted to a nearby hospital after suffering multiple broken heel bones and four fractured vertebrae. Tveter was also taken to hospital, although he was later discharged with heavy knee bruising.