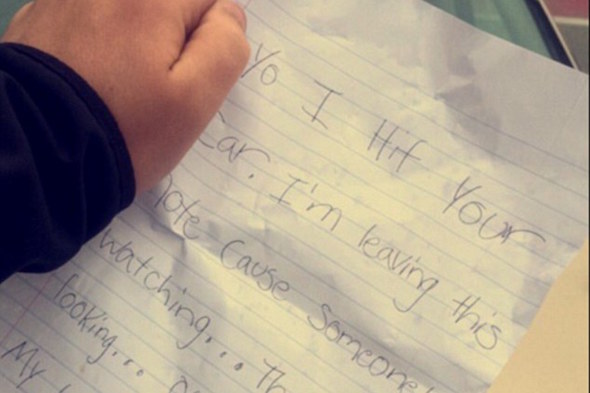 Credit: Tcalloww
A motorist returned to their car to find it had been crashed into – and the culprit had left a hilarious note for them.

The driver, believed to be from Massachusetts, came back to his parked car and found that it had been scraped on the bumper.
As well as the damage, the driver found a note – which was less than helpful.

The note read: "Yo I hit your car. I'm leaving this note cause [sic] someone's watching.

There were no further details left on the note, leaving the motorist laughing but unable to fix the car's damage through the offender's insurance.

The driver wrote on Twitter: "Not even mad about the scratches.

"Hands down the funniest thing that has ever happened to me."

It's unclear for now where in the state the car was parked, through it appears to be a city street given the cars parked on either side of the street.

It's hard to tell what type of car the Twitter user was driving, though it appears that the damage wasn't too bad. The tweet, which was sent out on May 5, has been retweeted more than 40,000 times and 'liked' over 68,000 times.

Although the culprit failed to leave any contact information, it seems that most can see the funny side of the incident.

Have you ever been left a note after your car was damaged? Let us know in the comments below.
Tags
Read Full Story