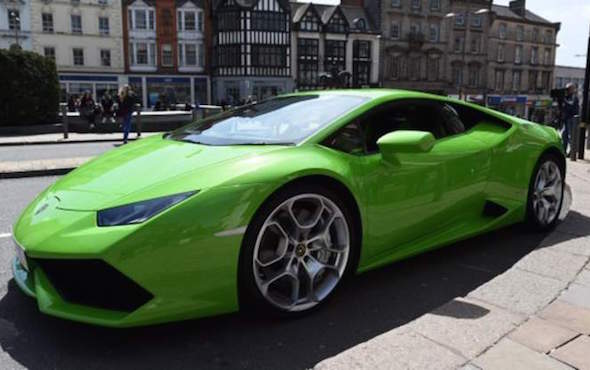 Commuters who fancy an alternative to the train can now treat themselves to a more luxurious trip home.

Not only is the ride more comfortable, but significantly more powerful and a lot more expensive. That's right, a 602hp Lamborghini Huracan has become Britain's first fully licenced supercar taxi – with fares starting from £349 for a 90-minute journey.
The neon green, 15-plate model has a price tag of £196,000, a top speed of 202mph and can accelerate from 0 – 60 in just 3.2 seconds.

It is owned by Heidi Warke, who alongside her sister-in-law runs Special Wedding Cars, a Wolverhampton-based private firm who hire a host of cars out for special events.

Shortly after buying the garish supercar, the 30-year-old was informed by police that all of her vehicles would need a private hire cab licence.

Speaking to the Daily Mail, Warke commented: 'Now if anyone wanted to book it to the train station or wherever then that is fine but there is a minimum charge of £349 per 90 minutes. If they want to go shopping and want to arrive or leave in style then they can hire it to do that too.

'I don't think there is much room in there for shopping though but it could be used for the same trips as any other taxi. But we expect to get most custom from weddings and proms.'

Ms Warke founded the company only earlier this year following a trouble-filled experience with a hire firm at her own wedding. Other models on its books include a BMW I8, Jaguar E Type and Bentley Continental GT.
Tags
Read Full Story