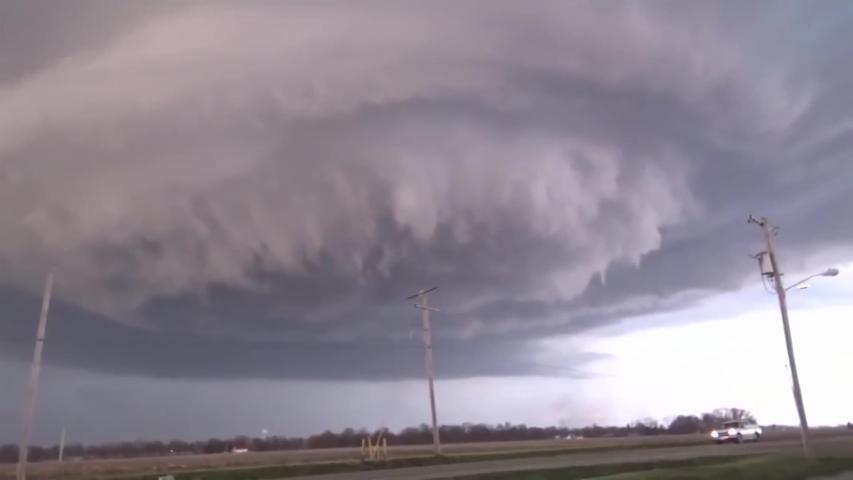 The weather in the UK can often be pretty unpredictable, with winter rain and snow suddenly cropping up in spring and intense sunshine in the depths of winter.

But this isn't the only country to experience bizarre weather - and plenty of other places suffer from far more extreme weather conditions than us.

This intense collection of strange weather has everything from hurricane disasters to raging tornadoes.

One clip shows beach-goers running for cover as they are hit by a freak hail storm in Russia. People are shown racing out of the sea as the stones rain down on the water creating huge splashes.

Another piece of footage shows bizarre but stunning waterspouts appearing in the water off the Portuguese coast.

The devastating impact of hurricane Patricia is also shown as water flows through a residential street and winds batter flailing palm trees.

Bizarre and terrifying weather captured on camera
Seeing a ring or arc around the moon is often a good indication that the weather is changing. The Weather Channel says that due to the structure and angle of an approaching warm front a hazy layer of cloud can sometimes be seen high in the sky before the rain arrives.

Seeing a red sky at night means that an area of high pressure is moving in from the west so there will be a good chance of dry and fine weather the next day. According to The Weather Channel, red sky in the morning means that the high pressure has already passed and wet and windy weather is on its way!

True! A red sky in the morning means the high pressure system has already moved east meaning the good weather has passed and wet and windy low pressure system is heading our way.
Weather records began in 1861 and since then there has been no mention of 40 dry or 40 days of rain after St Swithin's day on 15 July, says The Weather Channel.
The Pennsylvania groundhog (Punxsutawney Phil) gives a weather prediction each year on February 5 and according to tradition, if he sees his shadow and retuns to his hole then there will be another six weeks of winter. But The Weather Channel says Phil's predictions have only been right 39 per cent of the time.
Scientists have proved that there is a link between cows' behaviour and the weather. Researchers found that cows stand when the weather is warmer and are more likely to lie on the ground when it's cooler - such as just before it rains!
Swallows fly at the same height as the insects they are trying to catch and eat. When the weather is warmer, the insects are propelled higher by the rising hot air - therefore the swallows have to fly higher when the weather is warmer!
Late night rain and early morning rain are often an indication of a front passing by and this happens as often during the day as it does as night, which means rain in the morning doesn't mean it won't rain at night.
Seagulls tend to sleep on water but when it's windy and the water becomes choppy they will move inland and huddle on the beach.
This old proverb is thought to be a warning not to take off your clout (winter clothes) until the may blossom (better known as Hawthorn) is out because it heralds warm weather. Until you see it in full bloom there's always a chance the cold weather will return in the spring months, which happens quite frequently in the UK.
Up Next

Ina Garten teaches her viewers how to make a giant cocktail