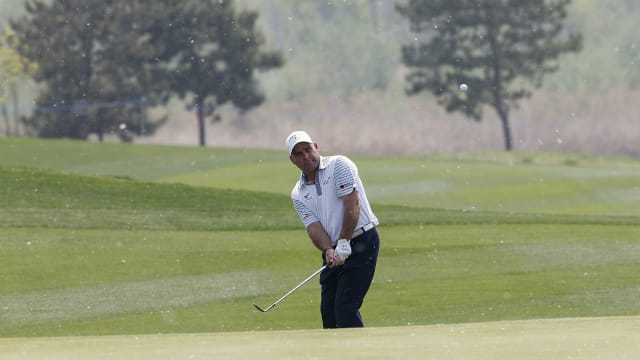 Hennie Otto was back to his best in a sublime first round at the China Open as he opened up a two-shot lead in Beijing on Thursday.

Otto has not won a title since being crowned Italian Open champion back in 2014, but carded a blemish-free nine-under 63 at the Topwin Golf and Country Club to top the leaderboard.

The 39-year-old has failed to finish in the top 10 since his success in Italy two years ago and his impressive round in the Chinese capital was his first under 70 on the European Tour since the South African Open in January.

There was no sign of Otto's struggles as he made birdies on the 11th, 15th and 17th after starting on the back nine.

He went from strength to strength after the turn, making another four gains before chipping in for an eagle three at the eighth to move to nine under.

Bernd Wiesberger will tee off on Friday in second place after a seven-under 65, the Austrian's only blot coming when he made a bogey at the 14th.

Roope Kakko, Fabrizio Zanotti, Peter Hanson and Gregory Bourdy hold a share of third place on six under, while defending champion Wu Ashun has work to do if he is to retain his title after starting with a one-under 71.

Rikard Karlberg had a day to remember, registering a hole-in-one from 201 yards on the 16th to win a new Volvo XC90.

The Swede said: "I was discussing up on the tee with my caddy what club to hit and how to hit it and I had to give in. I was not convinced but he convinced me how I should hit it and I hit it just like that and it ended up perfectly.

"I'll probably give him two of the tyres or something as a thank you. The factory is 30 minutes from where I live so it's pretty cool. I've won a Swedish car in China."