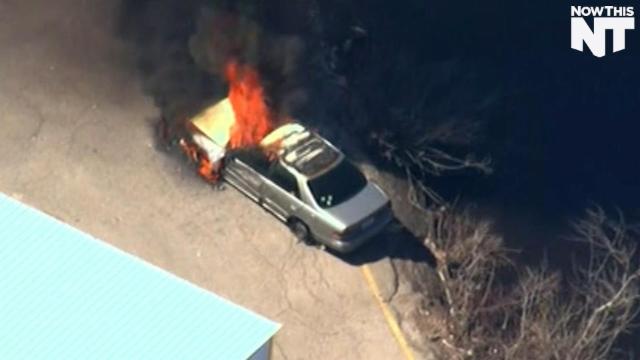 A high-speed police chase through the neighborhood of West Roxbury in Massachusetts, America ended dramatically recently, as the car burst into flames while the suspect made a get away on foot.

The incident begun after police approached a car and found the driver to be 'acting funny'. Soon afterwards he sped off, attempting to hit an officer in the process.
When police gave chase, he erratically raced away, swerving dangerously across roads and around lines of stationary traffic. At one point he lost control of his silver saloon and collided with a roadside barrier, before spinning across a thankfully empty carriageway.

The chase eventually came to an end when the driver pulled to a stop behind a branch of the American store chain, Party City.

Leaping from the car moments before it caught alight, the suspect fled on foot, only to be caught by police shortly afterwards.

An investigation into the incident is ongoing.
Tags
Read Full Story