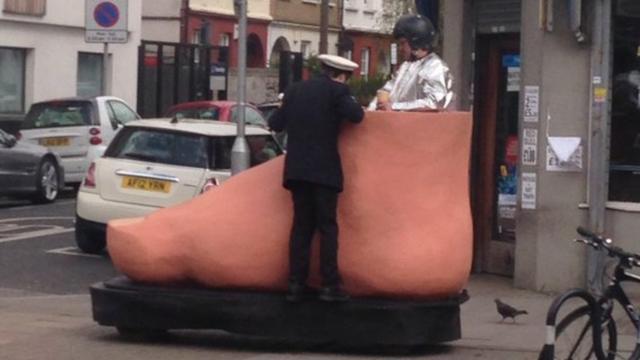 A man was recently spotted patrolling the streets of London in an unusual choice of vehicle - a giant motorised foot.

The strange sight drew the attention of the Wandsworth police force, who tweeted a photograph of the foot, which had a man in a silver outfit and helmet inside, with the caption: 'Spotted near Balham Tube, a typical day in Wandsworth... (anyone have an explanation?)'.
Baffled twitter users tweeted comic responses, including the suggestion that something was 'afoot in Balham' and advising that 'foot patrols look into it'.

It was later revealed that the handbuilt vehicle – aptly named Bigfoot – was a clever tactic to advertise the upcoming Wandsworth Arts Fringe festival.

Public realm arts company The Bureau of Silly Ideas took the musical foot roaming around Balham to promote the festival, which will take place in May.
Tags
Read Full Story